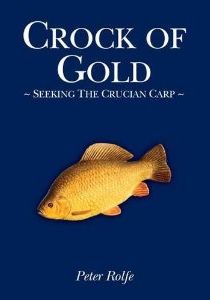 For me, the epitome of summer is sitting by a misty pool an hour before sunrise on a balmy June morning – staring intently at the red tip of a quill float as a blizzard of pin-prick bubbles surface and pop around it. Crucians’ are on the feed! But will they take my offering on the hook? Often the answer is no! Or maybe the bite is so tentative as to be hardly detectable! Crucian fishing can be infuriating and triumphal in equal measure. Triumphal when the piece of quill lifts an inch, a strike brings resistance and after a short struggle a wonderful bar of gold breaks the surface – brightening up my morning long before the sun is up!

Suffice to say that crucians are one of my favourite species – not for their fighting qualities – more for the challenge in water craft and bait presentation that they pose an angler. And up until now they have been sadly neglected in angling literature. Crock of Gold by Peter Rolfe does a grand job at plugging that gap! Peter Rolfe has for years been an unsung hero of the species – restoring ancient Wessex ponds and Victorian estate lakes and stocking them with true crucians. Four decades of dedication, which was recognised recently with Peter receiving the first Fred J Taylor Award for Environmental Stewardship.

Much of Peter’s experiences in creating ideal crucian habitats are in the book. However there is much more besides. I hadn’t realised that the enigmatic crucian was such a fascinating species with some curious and quite unique survival strategies. For example they exhibit ‘phenotypic plasticity’ which means to you and me the ability to change shape. This they do in response to the presence of predators – growing deeper – so that they are harder to grab. This transformation known as ‘gape defence’ can be effected in a matter of weeks.  Crucians also have legendary survivability in low oxygen levels. This is because they have the highest levels of glycogen of any vertebrate. This is used to provide necessary energy if oxygen isn’t readily available – a by-product of which is ethanol. Your average crucian, spending the winter under an iced up pond probably has a higher blood alcohol content than a New Year’s Eve reveller!

Such strategies are much needed as the poor fish is the ‘prey of choice’ for pike and perch and taken in preference to pretty much anything else these predators are likely to find in an English still-water. And it is for this reason, many an angling club has put a stock of crucians into a water – never to be seen again!

You can probably tell from the above that Peter Rolfe’s book is well researched – delving into and quoting from numerous scientific papers – often from Scandinavia where the fish has been much studied. There are also a chapters written by a dozen guest contributors such as Martin Bowler, Chris Yates, Mark Wintle, Hugh Miles, Peter Wheat along with less well-known names and specimen crucian anglers from Sweden (6lb+ Crucian anyone?). These anglers contribute pieces on tactics as well as reviewing famous crucian waters such as Marsh Farm. They are interspersed throughout the book and do rather give it a bit of a higgledy-piggledy feel at times. (I was also mildly irritated by the typos I came across – but then I am practically OCD about such things!)

Peter spends quite a bit of time on the thorny issue of identification and hybridisation – with numerous colour plates to illustrate. He even sets the reader a little ‘Can You Tell the Difference’ test – which I’m rather pleased to say I got 100% right! Invaluable information which will probably ensure my copy of Crock of Gold will constantly be referred to in years to come. Regardless of anything else the book does an excellent job of raising the profile of a neglected species.

If you’re a fan of the fish, then no doubt you will have already acquired this ‘cornucopia of all things crucian’, as the book has been out since August 2010. If not, why not? To any other angler interested in this fascinating species I recommend it whole-heartedly!

CLICK HERE to check the current availability and price of Crock Of Gold on Amazon UK.