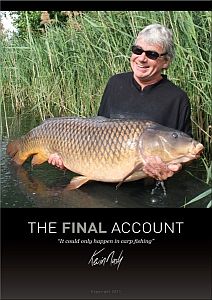 The Legend goes in search of The Emperor

I’ve sat through a fair few fishing DVDs: ‘I went fishing, I caught a fish, made a cuppa tea, then a friend came over and we had some beer, then I caught another fish, made a cuppa tea… oh, and this is what they look like underwater…’ So, when Kevin Nash gave me a copy of The Final Account, I wasn’t madly excited about it because I thought it would be similar to most of the others I’d seen. I knew he’d be asking questions when I saw him next, though, so I watched it and was pleasantly surprised.

I’m not an angler by any stretch of the imagination, even though I’ve acquired some knowledge about most aspects of the sport, and more about carp angling than any other discipline, but none of it amounts to a great deal. However, I was fascinated by Kevin’s account of his struggle to catch The Emperor from his Copse Lake, and for those of you who are thinking, ‘It’s his back garden pond and easy-peasy’, let me tell you that’s not the case at all. Yes, Copse is on his land, but it’s not exactly outside his back door and the carp have been fished for fairly regularly, so they’re very wary. It’s not a doddle, by any means, even for the bloke who owns it, as anyone who has had the privilege to fish for these remarkable creatures will tell you.

I’m not going to spoil the DVD for you by describing chunks of it. I’ll just tell you that it’s a top job; professionally produced, honest, realistic, quite exciting in places, funny in others and the scenery is stunning. Seriously recommended.