French River Adventure
Almost a year in the planning, we decided we wanted to go carp fishing in France, however, not to one of many, well publicised, more ‘commercial’ venues, but somewhere wild and relatively untouched, a river adventure. Much like our UK fishing, where we thrive for venues that few others fish, requiring an immense amount of effort, this trip would take that to a new level. Once the stretch had been found, the logistics were planned, a boat would be needed to reach the otherwise inaccessible peninsula and the ferry was booked. With 4 days for the bank holiday, this would be a research trip, before we return later in the year, with a better idea of what to expect and further venues on our target list.
Following the ferry and a grueling 5 hour drive through France in the early hours, sharing the driving to maximise our time on the bank, we arrived at what could only be described as our most idyllic river location just as the sun rose. Nestled at the foot of lush mountains, aqua green, crystal clear water poured over a rocky river bed into a deep back eddy. Fish were topping all over through the rising mist. We proceeded to unload the van and load the boat up, after 2 trips and a momentous effort hauling the laden boat over shallow gravels, sinking Into the fine gravel with every step, we had accomplished our mission, knees and backs much worse off.
By mid afternoon, in blistering heat, we had chosen our swims, set up camps and started placing our baits. We could see what looked to be small carp boshing in the flow on the far side, so we boated the first rod out over 150 yards away and got a firm donk as the 6oz lead hit the hard bottom. 4 handfuls of bait were scattered over a large area to tempt any passing carp and we rowed back.
However, by the time we placed the rod, a huge bow had developed in the line caused by the back eddy and stretch in the mono. Several attempts later with a variety of methods tried, we resigned ourselves to casting at 80 yards, not an easy feat with 6oz leads, long rigs and heavy baits. For this trip, we had brought 30kg of the ever faithful Redemption test bait from 3FT in 18mm and 24mm as there was a heavy population of bream, chub and barbel present.
The first bite came to James in the early evening, an immaculate 2lb barbel slipped over the spreader block with an 18mm bait firmly lodged in its mouth. From now on it would be 24mm only, although the barbel would have been great sport, they weren’t what we were here for and not so sporting on 3lb carp rods. An hour later, James’ right hand rod, placed at the bottom of a 16 foot shelf , melted off, he clamped down, only to find the fish was making a mockery of his clutch and powering away. He shouted for the boat, and we made chase after what felt like a leviathan. With head torches off, the sound of the screaming clutch and the moonlight illuminating the water, this was exactly what we had come for. 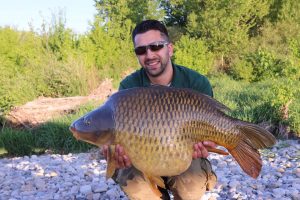 The fish surfaced and James called “catfish!’, due to the length of it, however, upon further tiring the river monster, a long, deep bodied mirror was sulking in the net. We couldn’t believe it, this was beyond our dreams. We had to save this immense fish, for the morning light to do her justice and she was in the retainer, in a deep pool of oxygenated water until the early hours. To cut a long story short, what followed, can only be described as the finest few hours of fishing we ever had. 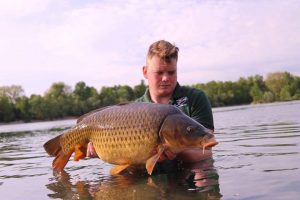 Neither of us had slept properly In 48 hours, but sleep was the last thing on our mind. With only 3 retainers with us, landing nets had to be used and light broke to 5 captured carp. James landed an Immense 45lb mirror, a 32lb 14oz almost identical fish and a 26lb common, I had landed a 33lb 8oz mirror and a 31lb 8oz football shaped common, with not a scale out of place. 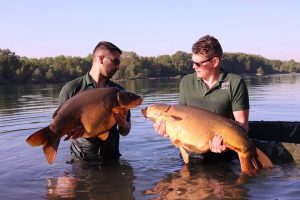 The Redemption had selected the big fish in a river stuffed with doubles and they had mopped it up, the retainers were full of the excreted bait. We had a great hour or two taking pictures of our quarry amongst the amazing scenery and we’re relishing the next few days...... 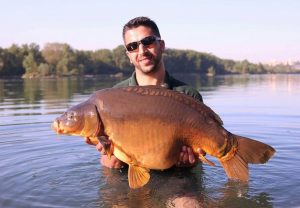 The 3 days that followed unfortunately were not comparable to the first night, the river level dropped almost 4 foot and the water almost stagnated, it was evident the main group of fish had largely left the area. We tried heavy baiting to bring them back, but ultimately the lack of oxygen, and cooler temperatures moved the fish to pastures new. 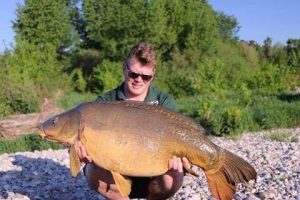 There were still odd fish in the area however and James proceeded to land a 29 and 24 common with a small mirror for myself also. I also ended up losing what felt like 2 big fish. The latter of the two came when we we’re making dinner, one bleep, two bleeps and then a one toner, a sure sign of a big fish, I ran to the rod and tighten the clutch gently, the 3lb rod buckled over, and the clutch sung it’s song before the line parted. Absolutely gutted does not describe it. Having discussed this, we think it was due to the back leads, washing the line up against the side of a snag, as the slack had been taken out of the line, it made contact with the snag and parted. 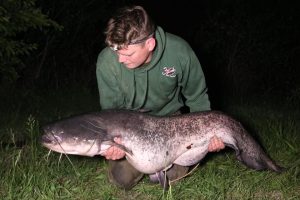 In the future we may have to use the bubble float or balloon method often used on these snaggy, French venues such as Rainbow. James also spectacularly landed a 57lb catfish following an epic boat battle, which had hoovered up between 2-3kg of redemption. This fish was small for the area where 150lb ‘Silure’ are ever present but I still managed an even smaller fish of around 10lbs.
We had planned to do a full video of the trip, however we never really got the footage we wanted to put out, due to the lack of day time action but there will be a few highlights of the fish we caught. All in all following the immense effort of packing away we can reflect on an extremely successful ‘exploratory’ trip. 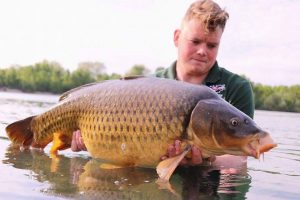