Check out this beast of a common, which tipped the scales at 54lb. Better still, Solar Tackle team member Thomas Mascha landed it on a quick, morning-only session. 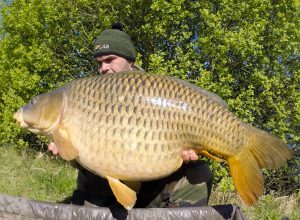 Targeting a large gravel pit near his home town in northeast France, Thomas has been pre-baiting an area on a little-and-often basis. Baiting the evening before his session Thomas put a few kilos of Solar’s Candy Floss boilies and a cloudy particle mixture, all of which he soaked in Candy Floss Mega Big Shot liquid, over the area.

Arriving in the early hours, at the first sings of dawn, carefully scattered a few baits over the spot and placed a Candy Floss pop-up on a size 4 Stronghold 101 hook and a small PVA bag of particles onto the spot. Not wanting to spook any fish that might be in the area it was all done carefully.

Shortly after dawn one of the rods registered a slow, steady take. On picking up the rod Thomas knew almost instantly that it was a good fish. A long fight followed, with the fish using its weight and staying down deep, but eventually a mass of golden scales broke the surface and this lovely common slid in to the waiting net.