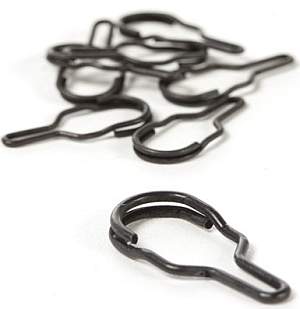 A simple solution to PVA problems

I love fishing with funnel web PVA, but I have to admit I’m never the tidiest, especially at this time of year when I’m arriving at the water in the dark and leaving before it gets light, so sometimes tend to give it a wide birth if I’m up against it.

The other pain for me personally has always been getting it out there. I’ve never been a fan of simply nipping the hook through the mesh and sending it out – too much chance of the mesh and the hookbait parting company before everything gets to the bottom of the lake – especially if it’s a big’un! Therefore, because I use a quick release system on my rigs, I tended to make up a funnel web bag, then insert a long baiting needle right the way down the length of the core, attach the link and pull it back though, then attach to the rig – thus the hooklink then went right the way up the centre of the mesh with the hookbait sticking out of the end.

In theory this was great, but often in practise once ready for casting – and when using a safety lead clip system – the link would move around in the mesh a bit and under load during the cast would often look like a sausage folded in half… not great! What was needed was a way of getting the mesh out, but without all the load being put on the hooklink itself.

The PVA Metal Link from Avid Carp is the perfect solution. The clip could not be easier to use, you just attach it to the ring on your lead, or lead swivel, and then rotate it so the narrow end points down towards the hooklink . With regards to the bag itself, you simply tie up as normal, but once finished tie another knot just above the normal one you would tie at the top of the bag. To attach, push the double tagged end through the wide part of the link, and then slot down into the narrow end of the clip so that the clip retains the bag between the two knots. Then just nip your hook to the bottom of the bag and job done – ready to cast.

In practise, this literally takes a couple of seconds and totally transforms the way you can fish mesh and funnel web. The great thing is that because all the load is absorbed by the link attached to the lead, the hooklink itself is under no pressure whatsoever during the cast – or on the drop down to the lake bed – which ensures everything lands nice and neat on the bottom. Result!

So simple, yet so effective. It’s certainly transformed the way I fish pva mesh and has made those late night fumbles in the bait bucket trying the thread links a thing of the past!