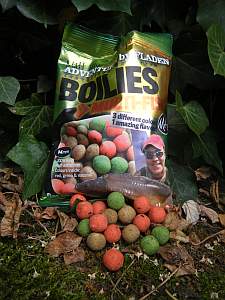 Versatility and affordability from the 'man on a mission'!

Matt Hayes, it seems, is a man who is permanently on a mission. If he isn’t fishing his way along the entire course of a river, he is setting himself near impossible specimen fish targets or ridiculous challenges to swap fish for ‘miles’ to go on an angling journey. He likes to entertain, but it does seem that he also likes to make it hard on himself sometimes. Some would say that his most recent challenge, to make ‘modern day’ fishing accessible to as many people as possible, is possibly his hardest yet.

Matt has recently teamed up with a couple of companies that are known for producing fishing gear at the lower end of the market when it comes to price. I’ve been following some of the discussions about this on the internet and it seems that there are two trains of thought; some think he’s just done it to ‘make money’, whereas others think that it’s a good thing to have one of the UK’s best known anglers fighting to get the ‘man in the street’ onto the bank.

One thing I would say is that if Matt wanted to do it ‘just for the money’, then he could probably have a whole shoal of companies fighting to add his signature to the dotted line. He’s not exactly ‘low profile’ and his TV and magazine exposure would attract a lot of switched-on business people. Therefore, if you’re one of the doubters, my advice would be to sit back and wait to see what he produces and then make your judgement. If the Matt Hayes Adventure Baits are anything to go by, it certainly won’t be as bad as you thought! Matt and Fladen have started well…

BASIC PRINCIPLE
The Matt Hayes Adventure Baits range appear to be aimed at the pleasure angler, rather than the specimen hunter. They come in relatively small packages, but offer versatility through the fact that the hookbaits contain THREE options per pack. This can either be three different colours, or three different sizes. Matt has labelled this the ‘Trio-Attack’.

Often, magazines, DVD’s and websites will instruct anglers to ‘ring the changes’ if they aren’t getting bites On many occasions, this can be a simple rig adjustment, change of depth, etc., but there are times when this can mean a subtle change of bait. Great…if you’re fishing maggots and were smart enough to buy a pint of ‘mixed’. Not so great if you’ve got to buy yet another bag of boilies or pellets!

This is a massive advantage of the Matt Hayes Adventure Baits range. You can make that change, or even try a combination on the hook, and you won’t be shelling out a single penny more!

So, let’s have a look at the range itself…

The staple bait of any carp angler’s armoury, these boilies come in 350g bags.

Each bag consists of three different colour boilies, all of the same flavour. I don’t know why, but I always assume that fruit-flavoured boilies will be the brighter ones, but in this case it’s reversed; the colours of the fruit boilies are orange, cream and a matt yellow. The Multi-Fish boilies, on the other hand, are bright green, red and brown.

Both baits are fairly soft compared to some shelf-life boilies I’ve used, meaning that the leakage rate will be high and they will give off plenty of flavour, which is usually what you want for short session fishing.

You get plenty of baits per bag and, with the three different colours, plenty of different ways of presenting your baits. On pressured waters, this could be the EXACT edge that you need.

14mm is a good ‘cover all’ size – small enough for waters that don’t have a head of big fish, but also a good size for specimens to hoover up!

My only ‘complaint’ is that the bag isn’t resealable. Not a major problem, especially as it would probably add to the price, but I’d be inclined to take a freezer bag, or similar, to keep them super-fresh and to store any left over for the next session.

These pop-ups come in 35g tubs. That probably means absolutely nothing to 99% of us, so I counted them – there were 30 in one tub and 32 in another. The things I do for Anglers’ Net readers!

Made to complement the boilies, these are slight ‘less round’, being more oblong in shape, and brighter. This is often the case with pop-ups. They are packed with flavour, which will hit your nasal passage the second you take the lid off!

They pop up well and can either be used alone, in a combination of colours (don’t forget, you get three different colours per tub!), or in conjunction with the boilies to produce a snowman rig. Not bad at all for £2.49.

35g tub again and just over 30 floaters per tub. We used to call them ‘dog biscuits’ in my day, but these are far too good for my dog!

Oily, full of flavour and, of course, with three different colours per tub, these are just perfect for catching carp ‘off the top’.

Personally, I’d grab a bag of cheap dog biscuits from a supermarket to use as freebies and then use one of the Matt Hayes Adventure floaters as bait. It will stick out like a sore thumb, yes, but in a way that screams “EAT ME!” to a hungry carp!

Even if you don’t regularly surface fish for carp, stick a tub or two of these in your tackle box. You never know when the opportunity will arise and there are days when the only way to tempt one is off the top. You’ll regret it if you’re not prepared for that day!

Not all fishing is about big carp, despite what you read elsewhere! There are plenty of other species to give you good sport and there can’t be many of them that wouldn’t be tempted by these soft hooker pellets.

Ready to use straight out of the tub, they are a great bait to have to hand; easy to hook, yet strong enough to survive a cast!

As with the baits already mentioned, the colour choices give you the edge over other anglers, without having to splash out on three tubs.

Perfect for ‘commercial’ fisheries, but don’t think they won’t work on rivers. They would be the sort of bait that roach and chub, for example, just won’t want to see roll by!

Matt Hayes and Fladen really have thought of everything and, if you want the complete set, the Matt Hayes Adventure groundbaits are well worth it. With the choices of baits already mentioned above, you will be able to fish on top of the perfectly-matched scent trail.

The groundbaits are made from good quality crumb and, as per the baits, are designed with high leakage and high attraction in mind. Whether trying to bag-up on a pressured commercial venue, or searching out big barbel on a fast-flowing river, they’ll get the job done.
Matt Hayes suggest mixing the two flavours together, to create yet another slightly different blend, and who are we to argue with that advice?!

If you want to build up a swim and hold the fish there, these breakdown pellets are just the job.

By having different sizes in the same pack, you’re offering the fish a mixture of flavours and breakdown rates. That said, when I put a few into my pond just to test the breakdown rate, my carp wolfed them down as soon as they hit the bottom!

CONCLUSION
The whole concept of the Matt Hayes Adventure Baits range is a good one. As I mentioned at the start of this review, they are not really for specimen long-session carp anglers wanting to throw tons of bait in. These compact packs are designed so that anyone can fish and fish with confidence, variety and a good chance of catching!

The whole ‘trio-attack’ concept is superb and it’s great to see that both Matt Hayes and Fladen appear to have listened to what certain people want from their fishing. Sure, you get plenty of people who are happy to throw £50 of bait into a lake every day, but not everyone wants to do that. Not everyone can.

The Matt Hayes Adventure Baits range is targeted towards somebody who wants to fish for fun, within a budget, and with a few different tricks up his or her sleeve. With these baits, they have all of that and more.

I’m told that the range is expanding soon, too, but to be honest, I think Fladen have launched with a pretty good mix. There’s everything there to get fish in your net.

These baits are available from any Fladen stockist, but if your local tackle shop doesn’t sell them, ask them to contact Fladen on 01305 821 111 to talk to a representative.

You can also buy them from Amazon – CLICK HERE for details.