Carp Against The Clock – Part 4 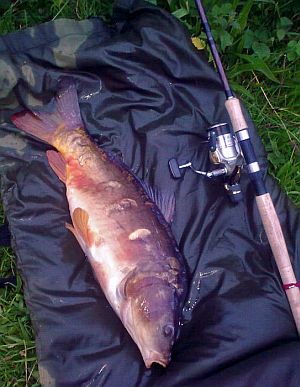 Home » Carp Against The Clock – Part 4

One hour to catch a carp from a new venue…

My third outing was an hour stalking at Whiston Hall Fisheries, a tranquil little day ticket water just outside Cheadle in north Staffordshire. I’ve known about the water for years but, for one reason or another, had never actually been to see the place, though after having a quick walk around the week previous, it was clear there were some nice fish up for grabs.

On my reconnaissance the week before I had been quite surprised by the amount of fish I’d seen up on top, all of which looked to be good doubles with a couple nearer the 20lb mark. Rumour had it that the fish were extremely tricky to bank off the top, which, to be honest, was music to my ears. You would not believe the amount of people who will not even bother attempting a particular method because apparently the fish “don’t go for it”. In my experience, if nobody does it, it’s often the best method to adopt and get in on the action!

On arrival at the water, I had the entire complex of three lakes to myself, so would be able to stay quite mobile for my session, which would help me get a feel for the place. There are three small lakes on the venue; one of about an acre, and two just under half an acre. I decided to have a dabble on the larger lake as this was where I’d seen some of the bigger fish the week before. The water is a little odd to be honest, in that it’s sort of kidney shaped with one island, but has a long stone built spit about 5ft wide that goes right out into the lake. You can’t static fish from it, but you are allowed to stalk from it… so no prizes for guessing where I headed to first!

It was fantastic fishing from the spit, as you had excellent vantage over both sides of open water and so long as you kept crouched down, the fish were not in the slightest bit wary about coming right in under your feet. For the first five minutes I trickled mixers down each side of the spit and catapulted some out to various areas. I then just sat back and watched. The water is spring fed so clarity was excellent, and before long I got my first glance of a fish – two in fact. Both were really nice mirrors of around 16-17lb, and passed by just a few feet down to my right, completely oblivious to the mixers just above them.

Ten minutes in and a few more fish had passed through my baited areas but again, none had stopped off. After another few minutes, whilst observing a fish near to one of my distance spots, I heard a distinctive ‘schhhlooop’ as a mixer was sucked down… It’s always a buzz when you hear the first one taken, as it’s often the case that the next one won’t be far behind, and with every additional one that’s taken your chances of banking a fish increase exponentially!

Another ten minutes and the mixers are being taken on a regular basis over three spots I’m feeding; either side of the spit and off the point. I like to keep a few areas going as one can easily dry up if you bank a fish and spook them all away. Fish were showing with enough regularity and confidence down to my left that I felt it was time to introduce a hookbait. The spot was only about ten feet from the bank so visibility was perfect. Some of the fish I saw drifting in and out were fabulous; some real scaly beasts that would look even better on my unhooking mat.

Just a moment later, the two upper double mirrors I saw earlier glided back through the area side by side. One slowed and tipped its head upwards to take a mixer just a foot from my hookbait and my heart began to pound. It then circled and came back for another pass of the area whilst the second fish just hung back. Up it came, mouth completely open taking down everything in its path. The hookbait looked tiny as it slipped into the carp’s cavernous mouth and reminded me of one of those log flume rides at a pleasure park just as the ‘log’ slips over the brow and heads down the chute at immense speed! The moment lips sealed shut around the hookbait I gently lifted in and immediately felt solid resistance. The water erupted, the fish bolted and yet somehow it managed to spit out the hook in the process… gutted!

This can happen every now and again when surface fishing, but there’s no worse time than when you’ve seen the fish that could have been your prize, and to rub salt in to the wound it was a proper heavily plated mirror. Ho hum.

After a quick check of the hookbait and hook, the rig was sent back out to the same spot, as surprisingly there were still a few good fish taking mixers in the area. Shortly afterwards I was able to connect again, this time though everything held firm and a nice mirror headed off on a powerful run. On light tackle it’s always best to let them go before trying to gain line back, and it’s a case of trying to let them think they have the upper hand, but gaining line at the opportune moments until before they know it they’re beaten and sliding over the net cord.

The fish fought well right to the end and was certainly no push over. It’s always nice to get your first fish from a new water and this pretty little mirror or around ten or eleven pounds was ample reward. An empty back end indicated it would usually be a few pound heavier but after a successful spawning it was looking a little lean, but more than welcome all the same – time on the clock stood at 43 minutes… result!

That was my only fish of the session, but it’s a cracking little water with great potential so I’ll definitely be back for another go soon. For any in the area who fancy a crack at Whiston Hall, the website is at: http://www.whistonfisheries.co.uk/