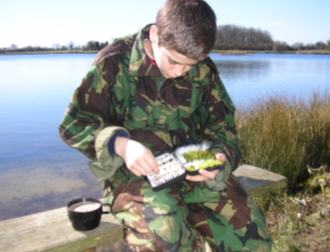 The following article was submitted by Andrew Fielder

I am going fishing today with my son. In my mind, this day has been planned for, dreamed of, worried about, and most of all, looked forward to, since he took his first faltering steps. Dad and his boy – going fly fishing together!

I learned to fish under the calm and steady guidance of my own father. He made me my first fishing rod (from a garden cane, no less), and with it I caught my first fish. Sparkling like a jewel in the late afternoon sunshine – a roach, which weighed in at over a pound! A veritable leviathan in the eyes of an eager 7 year old, and an event which I can recall as clearly today as on the day itself. We had a few outings together, but in reality, my Dad was not an avid angler. However, it was down to him and his taking the time to help me get started that has resulted in my having over 40 years of wonderful fishing memories to look back on – and for that, I am forever grateful.

So now it’s my turn.

My 14 year old son, Mark, first picked up a fishing rod at the age of five. I tried to emulate the efforts made by my father; I kitted Mark out accordingly (with something a little more suitable than a garden cane!), then took him to a local pond, where much to our mutual delight, he caught a few small carp and roach. We have since spent much time together pursuing coarse fish, but in the Autumn of 2006, I felt it was now time to introduce him to the delights of pitting his wits against a completely different kind of adversary.

A couple of impromptu lessons at a local pond using a 9ft 6in WF6 rod with a woollen tag in place of a fly soon had him putting a nice line out on the water. We followed this up with two visits to a local fishery where I could attempt to demonstrate the practicalities of putting a trout on the bank, and let him have a go at doing likewise, with some hands-on guidance from myself. As with attempting to encourage any young angler, what really counts is getting out there and letting them catch a fish for themselves, and so with that in mind, on a beautiful, clear late Spring day in 2007, I organised a visit to one of my favourite trout fisheries, Bushyleaze, in Lechlade, Gloucestershire. It would be here that Mark would take that first big step in his trout fishing “career”, and have a go at catching a fish all by himself, from start to finish.

Fortified with a full English breakfast and a mug of tea, 8.30am saw us on the bankside by the fishing lodge. The day was sunny, with a cool but gentle northerly breeze. Round by the lodge, trout were conspicuous by their absence on the surface, and so we decided to walk around the fishery to spot any movement. A trek to the far bank gave us our first sighting of a fish. With the potential quarry now in view, Mark tackled up, and selected a size 10 black and green goldhead Montana from the fly box as his weapon of choice – this turned out to be an inspired decision.

A deep, heavy swirl close in was all the encouragement Mark needed. Keeping well back from the edge, Mark placed the fly deftly to one side of the receding ripple. A few figure-of-eight turns and all went solid as an unseen shape tore off towards the deeper water. Lifting the rod and keeping the tension on, Mark soon had control of the contest. Line screamed off the old Leeda reel as the fish made a desperate attempt for freedom. The fish decided to bore deeply, and each time it approached the net, the battle was replayed once again with renewed vigour, but for a shorter time than before.

Mark held his nerve (whilst I was rapidly losing mine behind him!) and patiently allowed the fish to tire against the constant, but steady pressure of the rod. A last few strong pulls from the fish, followed by some deft use of the landing net, resulted in the first successful capture of the day. A typical Bushyleaze rainbow, in fin-perfect condition, and weighing in at around three pounds – a great start to the morning.

I don’t know who had the biggest grin on their face – me or him! What I do know is that, just standing there and watching my son, I felt a marvellous sense of pride, achievement and sheer delight all at once – something akin to the very moment I caught that first roach all those years ago. Here he was, ably demonstrating that which he had been shown, and with a finesse and deftness of touch which belied his youthful inexperience.

From his time spent in coarse fishing, Mark has obviously gained a level of watercraft which I had not fully realised, as I was then gently reminded to keep low on the skyline, and not to jump up and down on the bankside and scare all the fish away! After all, as he was keen to point out to me, where there’s one fish, there may very well be another – and so it proved to be. A second rainbow decided to engulf the Montana a few casts later, and, after a tussle mirroring the previous encounter, joined its comrade in the bass bag.

Following this early success, we took a leisurely stroll around the quiet wooded end of the fishery, where we spotted two good fish, probably both into double figures, lying right underneath the overhanging branches of a bankside willow. Mark tried a few tentative casts close to the willow to try and entice one of these fish from its snag-ridden lair, but to no avail. Another fish showed itself close in to the bankside vegetation in very shallow water, but this one turned out to be a jack pike, so we gave it best, and proceeded to walk around to the boat jetty in front of the fishing lodge, where we spent a pleasant fifteen minutes just sitting in the Spring sunshine, drinking coffee, talking tactics, and simply revelling in the delights which Bushyleaze, and trout fishing itself, has to offer.

By now, there were a fair number of anglers on the lake, and, as we progressed on our own second lap, I found it most encouraging to see many of them stop by and ask how my boy was doing. This is one of the very definite positive differences between the worlds of fly fishing and coarse angling. Many is the time where an enquiry as to how somebody is doing on a carp lake has been met with sullen silence, and the “mind your own business” look (as usual!) of the secretive carp angler. Not so in the trout fishing world, where many anglers are more than pleased to share their advice and knowledge, not to mention a free sample of the killing fly on the day. It was delightful to see Mark share his news about his two fish and the all-important information about where he had caught them, and on what pattern of fly. This kind of attitude and comradeship has just got to be good for the new entrant to the sport, and so I take my hat off to those anglers who were so willing to stand and listen to Mark for a few minutes, and share their knowledge and tactics with him – thanks very much, chaps!

The Montana continued to work its magic as we moved from place to place around the fishery. Today was not the day to talk about matching the hatch, or continually changing patterns – the fly was working – and the fish obviously liked it! Halfway along the far bank a slow retrieve w
as met with solid resistance, and the yellow Cortland line streamed off the reel with increasing speed and power. The rod took on an alarming curve, and I watch anxiously as the fly line backing saw sunlight for the first time in many a day. There was a grim determination on Mark’s face – I could see that he sensed this one was a bit bigger than anything else so far. He played the fish with great care, and a ten minute arm wrenching tussle was rewarded with a fish in mint condition, close to the five pound mark. With the fish safely in the net, the smile on his face was priceless – this is what it’s all about!

After a leisurely lunch, we started our third lap of the lake. The far bank near the fishing hut was proving to be the day’s hotspot, and all the adjacent spots were now occupied. We continued past the line of anglers until we turned towards the shallow bay in the Northwest corner, which appeared on first glance to be occupied only by a pair of nesting swans. The breeze had stiffened a little, but there was a definite cut-off where a ripple formed, but left a nice flat, calm foam line close in, and running parallel to the bank. Mark pointed out the first tell-tale dimples in this area as a trout nosed into the scum and mopped up a fallen fly from the surface. The Montana was still his preferred choice, and I was just about to advise him to make a pattern change when the line drew tight once again. A spirited battle at close quarters ended with another fish weighing close to five pounds joining the others in the bass bag.

Twenty minutes later, and two more fish from the same spot in the foam line, and it was all over for the day. A six fish limit, with two nudging five pounds each – and all on just the one fly!

Job done! Was I pleased? – – Oh, yes!! In today’s world of high-tech toys, gadgets and TV games, it’s very hard to find entertainment for a teenager that doesn’t come straight out of a box, but there’s nothing more guaranteed in angling than a little bit of success ensuring that the fishing bug bites hard, and for good. True, there will be days when Mark will throw everything but the kitchen sink out there to no avail, and it must be stressed that making the fishing too easy (if that’s possible) should really be avoided, otherwise days like today will be the expected norm for all future trips.

Today was a good day. All the planning and preparation paid off handsomely, and I am just so pleased that it all went according to plan. I feel that I have achieved that vital first step in helping my son onto the trout fishing ladder; and my biggest wish is for him to continue through life enjoying his fishing with the same determination, eagerness and hope, and maybe even with a regular level of success as was achieved today.

I have spent most of my own life enjoying angling (and the countryside itself) in all its forms. I have learnt respect for the environment, and also for the quarry I actively seek; Through angling, I have made many friends, had some great times along the way, and most of all, I have enjoyed it all immensely. If, after today, I have helped my son onto a path which ultimately rewards and fulfils him in the same way that it has for me, then I will be very, very pleased indeed.