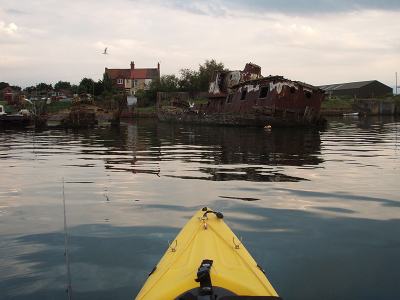 I decided on Saturday night to have another crack at the Bass in the estuary and perhaps get lucky with a Mullet. My youngest and I had dug a few harbour rag on our way to the park (slight detour) and so I was set to go as soon as they were in bed.

I paddled out to the wreck and anchored off.

I moved around a bit and watched the sun setting.

Still nothing bar a crab.

A few small rings of fish topping but still nothing as the sun set more.

Then it started to rain and I decided that at 10:30 enough was enough. Besides, I had to get up early the next morning…I blanked, but I’m claiming it as a Mullet session to save embarrassment!

…dawned beautiful and I had got up early to use half of my present from the girls – twenty ragworm biggrin.gif – beat that! A quick coffee and I was on the way to a new launch site. I only had a short session available so I figured that the spot I fancied for sole and bass would be better to access by driving close, parking up and launching off a little beach I sometimes went for a picnic up until a year or so ago. I hadn’t figured on it changing so much since then…

I unloaded, hauled the yak up onto the sea wall and wondered where the hell it had gone. Still, nothing ventured nothing gained and there were a couple of square metres that could be used if I could get to them.

Clambering over the rocks with a Prowler 15 on your shoulders is not fun. Glad I didn’t have the Trident!

Loading up, tackling up and getting ready was interesting as the moderate swell was turned into a decent wave as it reached the steep incline of the beach and I got a wave or two over the bow on launching before it flattened off a few metres out. I paddled out and dropped anchor near Ness Point – the most easterly point in England.

I blanked apart from 3 crabs.

It was a lovely session but even so…I came back in to a cooked breakfast from my wife and a total of four cards from my girls before heading down to Southwold for a seafood lunch on the harbour.

Start of the Coarse Season…

16th June….that’s a day for all us coarse fishermen in England. It’s the start of the new season. Tempted though I was to ask Andrew for the day off I decided that I had too much to do after the show I was at last week and went in instead. Funnily enough it was the last day of the season when I packed up slightly earlier than planned and drove over to the office to be offered the job…three months seems an age ago. So I turned up at work with the Prowler 15 on the roof of the van (my Trident is in a mate’s garden at the moment and a bit heavy for getting on the high roof of the van on my own). The back of the van held my rods, PFD and wet gear along with a coolbox containing the other half of my Father’s Day present – a pint of maggots. I ask you, who could want for more thoughtful daughters?

5:30 couldn’t arrive soon enough and ten minutes later I was out of the door and on my way. I headed back to where I’d finished the season but from a different launch point. I figured on going in at the pool, trolling downstream to the bridge and anchoring up. My rods were rigged with a pair of jointed Rapala’s bought for peanuts at Bass Pro last month (firetiger and blue) and the match rods had size 16’ with a float on one and a feeder on the other.

A few hundred yards downstream and the reel screeched. Game on, my first pike of the year…and it threw the hooks as it tail walked. A couple of pounds or so. Undaunted I carried on.

Another few hundred yards had passed. It looked like being a fine session and I brought in a jack of a pound or so. I was chuffed to start my season on a Pike.

Theoretically I should have carried on trolling as the pike were on the feed but I elected to stop and do some tiddler bashing. I anchored up at the bridge and cast out.

The float went straight under and in came a small Dace.

A few more followed and then the first of the Roach came aboard.

I had a few (and missed a lot, even though I was stepped down to a size 18) and then decided to have another troll downstream to the bypass bridge. Near the mouth of the quay the reel started to sing again…

A hard fighting 3 pounder, unhooked and sent on its way.

I went back up to the bridge and tried again for some more tiddlers. More Roach and Dace followed (only on the float – the feeder didn’t get a fish all evening although I did miss a couple of bites on it).

Then, and I was very happy to see species number 4 and a fish I do love, in came the smallest Ruffe I’ve ever seen.

It hit ten o’ clock and the light disappeared – it was like a switch going off as the fish stopped feeding and I couldn’t get a single bite so I slowly headed off again to the launch point. Of course if paddling I may as well be trolling and so the rapala’s went out again although I didn’t expect anything in the dark. I was halfway back when

This was a decent one too. I soon had it alongside and after a few last runs got my hand under its gill covers and brought it alongside.

Hooks out, I had to hold it at arms length and bring the camera right back to fit it all in – around 8 pounds I guess.

The first Broads session of the season…

Well, I had some maggots left – most in fact – so decided on a launch after the girls went to bed. This time I headed for Oulton Broad as I was time-critical, not getting onto the water until 8 o’ clock. Iaunched and paddled out from the yacht station towards the north-western edge.

Nothing came on the troll and the lures were running a bit deep for the Broad. I anchored up and a chap in a rowing boat came up and said hi. It took me a couple of minutes to recognise the (in)famous Peter Waller who I’d not seen for a long time. He lives on the edge of the Broad and had already had a few fish since the season opened…I bet he was champing at the bit!

Down went the float – although I never saw it do so and in came a micro Perch, one of the most beautiful fish in freshwater here although this one was somewhat on the anaemic side.

Nothing else came to my bait and so I headed west to try near the mouth of the dyke. Plenty of small fish topping but they were pre-occupied with midges and didn’t want to know about the maggots. I had one missed bite and that was it. So I moved again.

Again fish were topping but not biting my maggot and apart from a couple of large lunges ten yards from me at the edge of the reeds (I suspect a livebait would have had a pike in seconds) nothing was doing. Then I noticed the sky…

Blimey – were my eyes deceiving me? The float had gone. I didn’t believe it at first…yet I couldn’t see it so I must have a fish on? Yes, I could feel it pulling away and in came a perfect little Roach.

I came in having had two tiny fish that would have struggled to have weighed an ounce all-in but another pleasant evening on the water had passed. Tomorrow night is beer and as long as it isn’t raining It’ll be at the Lock Inn at Geldeston on the edge of the Waveney were the paddle is tranquil and the beer exceptional…of course my mates will have to slow down as I’ll be trolling…