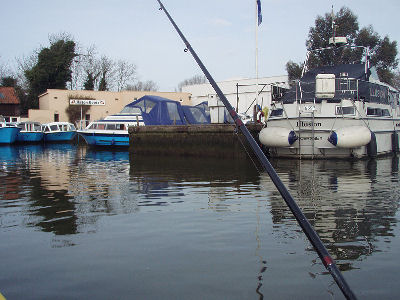 This morning, my fourteenth launch of the year, started off differently to intended. I had an extra half an hour of fishing time and considered driving an extra hour each way to Norwich to try and tempt one of the Barbel that swim around in the Wensum. I’d seen good carp at Norwich too and there seems to be a few Brown Trout to be had as well – three species that I have yet to have from a river in the UK. However, with heavy traffic following the school run I decided that I might as well just stick to the Waveney at Beccles for the remainder of the season and have a crack at some of the big Chub in my newly-found spot for them.

I had rigged my two match rods the same as before with the 4lb line, swimfeeder and double hook rigs and also had one of my spinning rods along with me, this time fitted with one of my old Shimano Crestfire baitcaster multipliers. These are nice reels but not having a clicker fitted they tend to not get used very often.

I launched around 9:30 from the slipway at the end of the quay and ran the gauntlet of a full bank of pole-anglers with a couple of carp bivvys/chairs/rodpods and some pikers scattered amongst them. I was most perturbed to find my usual spot for tiddlers occupied by a damned great cruiser and although finding a space to tie off my position was crap and casting was a problem – so was laying my pike baits in a decent position. I decided to give it a go for a while anyway so that I could at least pick up a livebait.

As usual I started to get bites almost immediately. I wish fishing had been like this as a kid! First into the boat was a small Dace which was duly rigged onto a single 4/0 circle hook, through the lips to tempt the Esox.

I am experimenting with a suitable alternative to the traditional pair of treble hooks as apart from restricting the movement of the bait I feel that with the high chance of deep-hooking pike when using a small bait I’d rather not have to risk damaging the pike by having to struggle with the forceps to remove them. Using a solitary barbless treble lost me a fish a fortnight ago, last week I lost five on standard single hooks and so the currently trendy circle hooks (almost guaranteed to hook your fish in the corner of the mouth) looked promising and I duly bought ten to try. From what I can gather these allow you to leave the fish a decent length of time in which to swallow the bait and then, when winding down, they set themselves and are used for longlines because of these properties. Out it went.

Next bite was a beautiful but tiny Gudgeon. Having taken 3 red maggots on a size 16 unhooking was simplicity itself and back he went. Such a pretty little fish and an indicator of good water quality I believe.

Anyway, I had my bait, the position was rubbish and I had just cast onto a cruiser so I decided that the time was right to head for my Chub spot. It’s only a two-minute paddle so I wandered down, tied up and cast the lines out.

The feeders had a slight difference in composition of groundbait this time. I’d not had much spare bread this week so had added some flour and porridge oats as well as the normal use of maggots. The pike line was running down by the pilings as I like to aim for the margins with these as they provide shelter for the tiddlers and features for the predators.

A lovely solid knock and I struck into the first Chub of the day. You know when you have one of these on as they do have the strength and willpower to make a run for it! It took a bit of line before I finally had him alongside and lifted him out. It went about a pound I guess and was a decent fish. Back it went, and was soon followed by another of similar size. I know I’m usually not after the bigger fish but I fancied exploring this mark more hence I put up with the longer wait for bites and the knowledge that the fish would not be so numerous today.

My pike float went down.

I lifted the rod and started bringing it in. It was a good scrap and I was amazed to see that it was only a small jack of a couple of pounds in weight – being used to the pike on the Broad the river fish always impress me with their relative power. This two-pounder scrapped like a broad fish twice the size.

The Dace had moved up the line onto the side of the pikes jaw so I was confident that the circle hook had done as promised and hooked it firmly in the scissors. Had it hell! It was lodged down its throat! Great, fell for the hype, didn’t I! Next I’ll take up sitting in tents for a week waiting for swimming pigs to hook themselves on unnatural multi-coloured balls of protein. I didn’t much mind however as not only did I have the bait back – and alive – I was able to extract the hook with the minimum of fuss and get the fish back in the water in short order. A fat little fella, it had a few fry or small fish (about an inch long) down its throat already.

More Chub followed, including the first PB Chub of the day (they keep getting bigger!)

The pike float went silly again and the disappeared once more. I began bringing it in and for 30 seconds or so I felt the pike on the end of it. Then it was gone. 1-1 on the circle hooks!

The tide turned and things went quiet. I decided to go and catch some fresh bait over by the boat yard again and then reeled in a small Chub that would be ideally sized. Out he went and I went off to the boatyard for a spot of action. First in was the first Rudd of the season, a midget.

Some small Dace, Roach and Gudgeon followed and after half an hour I set off to try the other side of the bridge, midstream and fishing blind.

Waste of time. One bite which I missed. I went back to my Chub hole and caught the second PB Chub, around a couple of pounds, slightly bigger than the first PB Chub but not enough difference to get the camera out for – I just had a good look at its gold-tinged scales and thickset body. And then I found a pike route.

1-4
on the circles, and this time I’d lost my baitfish. Muttering ‘Oh my word’ I up-anchored and headed back to the boatyard for some more bait. I had a Gudgeon first and then caught the sixth species of the day – a juvenile Common Bream which I should really have snapped before sticking trebles into it (I changed over while I was waiting for bites)

Back I went to my new-found pike route and fished for a further half an hour. I snagged up and lost all but my swim feeder on the one match rod and had already tangled and cut off (into the yak) my other match rod so I was only fishing the pike rod. Nothing happened, making the Bream the last of my sixteen fish for the day – 6 Chub, 2 Roach, 3 Gudgeon, 2 Dace, 1 Pike, 1 Rudd and 1 Common Bream. I paddled back to the quay, loaded up and set off for the school run. Two weeks left before the close season…