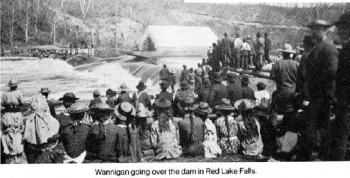 Another Day My Brother Managed Not to Kill Himself

My brother decided it was high time we put an end to the winter and enjoyed the pleasures of spring.  Winters can be very dark, long and cold in northern Minnesota. My brother must have been totally fed up.  He has always been an extremist and decided to take matters into his own hands on this occasion.

I was already out of breath standing atop the bridge over the Clearwater River having run up the hill from the old river beach where we used to swim as children. After a long debate, that was where we decided to put in the canoe. I watched with my heart in my throat as he shot through the old saw mill dam without wearing a lifejacket the day after the ice went out.

In the olden days, a “wannigan” was, as far as I could tell, the Native American word for more or less “boat house”.  The word came from Chippewa and, more specifically, Ojibwa.  One of them tried to make it over the old saw mill dam.  I reckon my brother had a slightly better chance in our canoe.

The Joys of Spring

For us spring meant we were finally able to canoe and fish on the Clearwater River and the Red Lake River.  The two rivers ran through our town and met at a point where they joined the Red Lake River system flowing up to Hudson Bay.

As spring started to arrive, we used to bet when the ice would go out on the Clearwater. The earliest I can remember was March 17 but it was usually much later (at least until global warming set in).  The ice on the Red Lake River tended to go out a bit later because it was bigger and had a slower current.

The ice going out on the Clearwater was very important to my brothers and me because, more than any calendar event, it defined the precise moment when spring arrived. Even more, the ice going out meant that the many joys of our rivers would soon begin to materialize.

These joys included no less than rod fishing, spear fishing, bow and arrow fishing, swimming, canoeing and jumping off the old railroad bridge and its ice breakers. Such joys required you, presumably, to wait a little while until the water warmed up a bit.  Not for my brother.

The Rapid Shoot through the Old Saw Mill Dam

How could my brother even think he could make it through the rapid shoot of the old saw mill dam in a canoe with so much icy water pouring through and so many ice kegs to deal with?

An “ice keg” may not even be an appropriate American English term but where we grew up it meant a large shard of ice floating, submerged or stuck on the rocks after the ice went out.  In essence, ice kegs are large blocks of stationary or floating ice resulting from the break up of the winter ice on a river. Together with the resulting ice jams created, they can make it extremely dangerous to even stand near the Clearwater River when the ice goes out.

My brother insisted it would be “fun” to shoot the rapids through the old saw mill dam and that I was being a coward by not joining him.  In the end, we agreed to disagree but under no circumstances would I consider joining him on his near-suicidal mission.

My brother always knew how to wind me up.  After I insisted that he needed to wear a lifejacket, he finally made one concession. He agreed to “sit” on a lifejacket so that it would be available if necessary.  We both knew in our hearts that if the canoe flipped on him, the lifejacket would be more or less useless given the ice kegs everywhere in the rapids and the ice-water he would experience.

Lake Agassiz and the Two Rivers

The history of glacial Lake Agassiz explains why the Clearwater River and the Red Lake River are so beautiful and violent at the same time.  Lake Agassiz was bigger then all the Great Lakes combined following the last ice age more than 10,000 years ago. The southern shore was only a couple of miles from my hometown of Red Lake Falls, Minnesota.

As the Earth warmed, some of the water from this huge glacial lake poured through a basin that included my hometown. The results were beautiful clay cliffs, incredible rivers, multi-coloured granite rocks and white-water rapids.  The clay cliffs in my hometown remind me now of the white chalk cliffs of Dover in England.

The remnants of Lake Agassiz still have a profound effect on the landscape of Canada and the Midwest United States.  Among other features, Lake Winnipeg, Lake Manitoba and Lake of the Woods linger in its receding geological footprint.  Each lake is situated on the northern side of the continental divide which geologically determines whether a drop of rainwater flows south to the Gulf of Mexico or north to Hudson Bay.

As much as one could disagree with my brother’s recalcitrant behaviour, in Sweden there is a song about what you need to do to start summer.  The essence of the song is that you should never believe it will be summer unless someone tries to start doing summery things. My brother surely must have decided it was high time to canoe through the white-water rapids of the old sawmill dam without a lifejacket in order to get summer started.

As noted above, I protested that canoeing through the rapids was not a good idea.  We were dealing with some serious ice kegs in various positions throughout the rapids.  If he screwed up and flipped the canoe, he could easily be wedged under an ice keg with no possibility of escape. The other obvious objection was that he would be in a world of hurt from the frigid and rapidly flowing water.

Spoiling for a challenge, my brother decided he would not wait one moment further.  The ice had gone out on the Clearwater River the day before and it was high time that someone ensured summer would arrive. In his mind, I believe there was no longer any good reason to wait for the mass volume of water to either calm down or warm up on the river.  We continued our heated debate regarding his sanity and personal wellbeing as we carried our canoe together down to the old river beach.

Perhaps there are certain people among us who need to test the boundaries of human existence.  I grew up with one or more of them.  After many years of challenging the brother in question at various levels of intellectuality, we both grew tired of the repetitive and futile debating of one another.

A “thrill seeker” in my mind is someone who, for some reason or another, wants to either kill himself or otherwise enjoy an exhilarating near-death experience.  My preference has always been to lie in bed all safe and warm.
Carrying our canoe down to the old river beach, we continued our debate.  We used to swim there when we were little but nobody really used it anymore, even when it was hot.  There was a bit of sand leftover and a white, cubist changing room with toilets that no longer worked.  The only way to really get my brother to agree to do anything during a heated debate was to take the opposite position of what you ultimately wanted.  Even that didn’t work on the day.

Strangely, the Red Lake River system flows northward in a relatively arctic climate towards Hudson Bay. As noted above, a few miles south, a drop of water flows down to the Gulf of Mexico. Very few rivers in the Northern Hemisphere actually flow northward. A river that flows northwards creates many problems for itself. Such problems include flooding as the warmer southern parts thaw while the northern parts are still covered in ice. This can also create tremendous force as the water builds up and tries to flow northward to Hudson Bay.

To keep it simple, when the ice goes out on the Clearwater River (which is technically a tributary of the Red Lake River), the result is nothing less than sheer violence.  The effect is doubled given the geology of the area.  The Clearwater River served as a drainage pipe for the historical glacial Lake Agassiz when its soft sand banks finally broke through and the remnant glacial water was finally let out.

We were proud of our sawmill dam. It was something that resonated back to when my hometown had miles of timber floating on its rivers. The historical knowledge of how the loggers were able to float the wood down to the old saw mill, walking on partially submerged trees covering the surface of the Clearwater River.

Fred E. Cyr on the Clearwater River during the log drive of 1906

At times, they had to use dynamite to blow up the log jams that this manner of harvesting timber created on our rivers.

When the years of immigration to Minnesota ended around the end of the last century, we were left with a manmade dam on the river that forced the water to shoot through a relatively small gap.  Just below the dam were a confluence of large granite boulders, clay cliffs and one of the steepest drops on the Clearwater.  Not surprisingly, this gave us one of our best rapids for canoeing.

Running from the Bridge

The last I saw of the canoe, my brother hadn’t flipped yet and was still alive and paddling defiantly. He was doing his best to work his way through the myriad of ice kegs and hold a clean line through the rapids.  The Clearwater takes a wicked bend just after the old saw mill dam and I was left watching the white-water rapids and the adorning clay cliffs as he disappeared from vision.

I ran to the where the Clearwater usually subsides near the town park.  Once again, out of breath as usual, my brother was there waiting for me.  He had already dragged the canoe ashore and had a bit of a self-satisfied grin on his face.  Maybe he knew he was lucky on the day or maybe he thought he just proved to me that he was indestructible.  Thirty years on, I still don’t know.