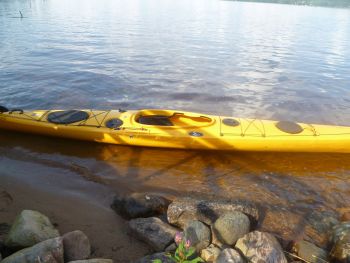 Ever since the embarrassment of tipping over my fishing kayak into the freezing water of a Swedish lake last year, I have sought some form of revenge (see related article “Lake Kayaking Plus a Few Lessons in Survival”, UK Anglers’ Net, September 2009).  I needed such revenge in part to restore my sense of fishing pride but, more than anything else, I needed to redeem myself and regain the favour and confidence of the fishing gods (and my wife for that matter).

This past summer, I finally found a measure of solace by catching a pike from my kayak while holding my nerve and my balance. This happened only after countless hours of trolling in a kayak and another strong dose of humility delivered to me no doubt directly from those very same fishing gods.

We decided to purchase a couple of used lake kayaks this year together with one of my neighbors in Sweden.  The kayaks were not designed as “fishing” kayaks per se.  Fishing kayaks have multiple rod holders and are more open by design to make life easier for an angler who needs to stow tackle, supplies and, not to be forgotten, fish.

The kayaks we purchased did have one very important quality, true to their origin.  The word “kayak” comes from the northern arctic Inuit language and means more or less “hunting boat”. More experienced kayakers call them “yaks” but, for the life of me, I can’t understand the need to abbreviate an easily pronounced word with only two syllables.

In any event, our kayak had a single fishing-rod hole awkwardly positioned behind the seat.  I knew that it would transform me from a paddler to a predator/hunter and perhaps redeem myself from last season’s fiasco.  When I capsized last summer, I lost two of my best fishing rods and some treasured lures from a professional fishing friend.

Truth be told, this year’s kayak fishing did not get off to any better start than the prior year.  One of my daughters had been out the evening before my first attempt in early July.  She had adjusted the foot-braces and rudder pedals of the kayak to fit her small frame.  When I climbed in early the next morning, I found myself with neither foot-braces nor access to the rudder pedals. My feet dangled uselessly in the netherworld beyond the pedals and before the containment tank at the front of the kayak.

Unfortunately, I had already set my newly acquired fishing rod in the hole behind the seat.  When I tried to climb out to readjust the foot-pedal pegs and rudder pedals, I capsized immediately with no easy way to extricate my feet.  As my face hit the water, I heard the loud crack of my rod breaking as the kayak flipped over in the shallow water.

My wife was quick to point out that it was not very clever to have put a fishing rod in the hole behind the seat before you were clear of shallow water. I agreed whole-heartedly. My wife also noted that, if someone was keeping score, Lake Fryken was winning our kayak fishing battle dramatically by three rods, two expensive lures and one person’s fishing ego to nil.

Discouraged yet undaunted, I decided to go into town and acquire some more fishing rods.  Importantly, I was also asked to buy some salmon to grill that evening as we were having company and I hadn’t caught any fish yet.  The irony of it all did not escape me.  I was being asked to purchase fish at the same time as I was supposed to be purchasing a fishing rod.

If there is a very happy part to this story for an angler – this is it.  At the checkout counter, I was shocked to find that one side of a salmon actually cost more than my new telescopic rod, open faced reel and a host of lures.  I knew then that in the future I could continue to buy more fishing gear safe in the knowledge that it was more economical than buying even half a fish.

The next day I decided it was high time to seek my revenge.  Armed with my new rod, I went down to the dock and pushed my kayak into the water.  This time I left my rod at my side until clear of the shallows.  My stomach muscles worked hard as I entered the less then calm water.  Holding myself steady through the white capped waves blowing from the southern shore of the lake, I made my way east across the lake.

I casted my six inch perch-like lure as far from the kayak as possible once clear of the shallows and then let the line run out to about 25 meters.  Once I gauged the line distance, the only thing left was to rotate my body without tipping until the rod could be placed in the hole behind the seat.  Given the white caps, I was happy to be able to finally put my fishing-rod into the hole without tipping over.

If you haven’t fished on lakes with slot limits, Lake Fryken in Sweden is one of the most stringent. The 50 centimeter limit for walleyes was designed to permit the game fishing population to recover after years of acid rain pollution from the former Soviet Union.  The slot limit meant that to keep a walleye (or “gos” as it is called in Swedish), you need to catch one of no less than 50 centimetres.  This forces you to use large lures to at least have a chance of keeping your fish without the pain of having to release a good fish just short of the appropriate size.

Using large lures means less action if you are seeking to find a meal.  Then again, you do not have to deal with the steady disappointment of catching fish that are too small by the lake’s standards.  I am a firm believer in catch-and-release and slot limits and I hope in the future a very healthy population of fish will continue to thrive in Europe’s inland waters, including Lake Fryken in Sweden. We all have to firmly respect such limits to preserve our ecosystem and maintain a balance of biodiversity in our lakes and rivers.

On the day, I fished a route I know as the “loop”. It involves crossing the two underwater ridges to the east across the lake until you are about a kilometer from shore and then heading north to follow the last ridge back into the shore.  As you approach the shore, the two major landmarks are a reed bed and a buoy situated about 20 yards from shore that marks a shallow mound of rocks for boaters to avoid.

As it turns out, my first serious kayak strike happened just as I was rounding the buoy on the loop.  As the rod groaned and the kayak slowed dramatically, I turned my head just in time to see the fish jump out of the water and shake its head.  I knew it was a pike from the glimpse I had and also the way it fought.  Compared to a walleye, pike fight you from the moment they are hooked until their effort has drained all energy from them or they are free.  This pike was no exception.

Without thinking, I managed to twist myself around and pull the fishing rod out of the hole behind the seat.  I then held my balance as the pike started to drag the kayak sideways back toward the buoy.  I pushed the rudder pedal to no avail – not surprisingly since I was more or less at a standstill.  Pinning the rod between my thighs, I then turned the kayak in the direct
ion of the fish.  At least I knew it was truly hooked.  Otherwise, it would have long since departed given my ineptitude.

The fishing gods were not finished with me, as I would soon learn. The buoy mentioned earlier is the only buoy within three square miles of water on the lake.  After a few minutes more of fighting the fish, it managed to take the line around that desolate buoy.  Now I was at the mercy of my monofilament (which I had changed the day before to a much higher tension). I reeled in the slack line but could not untangle the rest of it from the buoy in the waves.

I waited a few minutes, expecting the line to snap at any moment and considered my options.  Unfortunately, the only two left were to either cut the line or scream for help from a passing boater.  In the end, I decided not to cut my line.  I won’t admit asking (let alone screaming) for help but perhaps my wild arm gestures may have alerted a passing boater to my predicament.  The Swedish boater who eventually stopped to help untangle the line from the buoy was empathetic – which made me feel even worse.

Once the line was free from the buoy, I simply reeled in the fish.  It was a respectable sized pike but totally exhausted from the battle with the buoy.  I horsed it in over the side and into the cockpit of the kayak with me.  Now I had a fishing rod in one hand and a two kilo pike flopping around on the bottom of the kayak between my legs with a six inch lure with multiple treble-barbed hooks hanging out of its mouth.

I slackened the line, put the rod in its holder and paddled back to the house quickly, waiting for one of the treble-barbed hooks to be impaled in one of my legs at any time.  Thankfully, the pike was so tired he stopped flopping about.  Once back at the dock, I quickly took a photo and then released the fish.  Reviving it took a bit of time but I was happy because my daughters and my nephew were watching.  In time, they will learn the importance of catch-and-release fishing but for now they were simply mad at me for not having it for dinner.