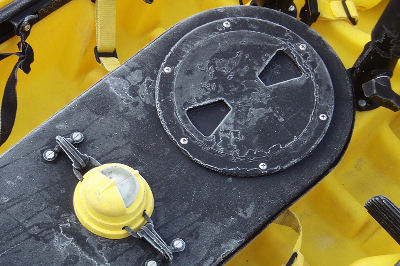 I’ve been fed up all week. It’s been ten days since I got on my yak in the water, 12 days since I fished properly. I should have been fishing Monday but was fogbound for the sea and car-less for the river. Bear with a sore head, that’s me – but sore-headed bears go fishing, especially (it would seem) when your morning lesson is cancelled…

This was the scene on Monday:

Today was the same and I had to warm the hatch on the radiator to be able to open it. My day had begun badly and I was angry whilst loading everything up before the school run. Eldest daughter deposited I headed off for my usual launch point at Beccles and tied up in my usual spot. I was fishing two match rods with swimfeeders (breadcrumb and maggot) with 2 size 16 hooks on each. I also had a third rod for piking, the wire trace fitted with only a single 2/0 hook as I wanted to try fishing for pike without having to perform surgery on the yak with the rest of the gear on there and would be livebaiting. I was also trialling my new RAM tubes – two on the waist position and two up front. I also have two more on the side of the tankwell for storing rods and actually used one as a holder today out of necessity – added bonus!

Here’s the waist one – superb for a quick strike:

The forward ones were unusable so the RAM 117’s will go back on those balls.

Now, today I was a man (or bear) on a mission. I had a target species. A hard-biting, quick and powerful fish, for its size, I was determined (hopeful) that I would get a Gudgeon. It was cold, it was a bit foggy, and it was very, very still. A few anglers were about but not many and I settled down to a bit of peace and quiet.

I’d been there about ten minutes or so I guess when the phone rang, my wife and my youngest daughter. Of course being on the phone means a bite developing but as it was my daughter and not my wife I ignored the rod tip banging away like an Iron Maiden fan on sulphate until she put the phone down like the good daddy I am. Then struck into the first fish of the day…

The slender, torpedo-like body shot through the water with the speed of a thousand gazelles. This was my fault of course as that was the speed of my reeling. And lo and behold, my first fish was my target species for the day! First of the year, first on the yak and first I’d had for years – Gudgeon! A pretty little thing this, probably weighed a good few grammes too. I think it was a delicacy in Roman times. Mind you – they used to eat a right load of rubbish back then, so it’s hardly a recommendation.

Next up was a nice, solid tug and a line that went careering off to the side as I reeled it in. For a tiddler, the Dace is a superb little fighter and a pretty little fish. This one was a PB too, so that was a bonus. Two fish, two species, this was going to be a fun day! Onto the livebait rod it went.

A sharp rattle. I struck and wound down onto fish three and species three! Mr. Rutilus Rutilus, that good-old boy everyone knows so well: the Roach. A splendidly shiny little chap with red fins, silver scales and a deep blue back I made a complete hash of the pictures and got him out of focus. It’s just not good enough Crame.

Something was happening to my livebait. I wound it in and could see it had been hit by something. It was still alive though so I popped it back out and pulled in the first double shot of the day; Roach and Gudgeon:

I brought in a few fish here and there of these 3 species and then noticed that my livebait had got himself caught up in some pilings. I had to untie and go and release it, using my paddle to free it off. It then did it again before I could reel in the slack so I repeated the exercise and positioned it further away while I got sorted to return to my spot. Down went the pike float and I was into a good fish, a solid one that I didn’t get to see. It had the Dace and spat back the single hook. Not impressed with that – trebles would have seen that fish aboard. Glad I used the paddle instead of my hand to free the fish from the piling though!

I carried on taking out Roach, Dace and Gudgeon singly and in double shots for a while longer and then:

A double shot that consisted of a Gudgeon and a juvenile Common Bream! They were not in my swim today so I was lucky to get one to make species number four. I had another one later, one of which is below:

I decided to make a move. The bay by the bridge is shallow and although bites are few and far between they usually develop into a decent fish and so far I’d only had tiddlers. It took 15 minutes to get a bite, but then, dropping the tip back and then shaking it meant it was time to strike. Pulling line from the reel on its way in, via my port and starboard sides, came a beauty of a fish.

Species five and another PB! A beautiful chub larger than my first ever back on the Nene with Pete.

I was well chuffed, and five minutes later had another slightly smaller with another good account given by itself. Not wanting to look a gift horse in the mouth I felt a bit bad moving spot but decided to carry on species hunting. The livebait rod (at this point holding a Roach) had done nothing and I went and tried it and the feeders in the dyke. Ten minutes with only a slight shake and I decided to go back to my first spot, where more of the same followed.

And a run from a decent pike. Another solid river pike that dropped the single hook. I cast out again and after a few minutes the float disappeared and I struck into it and wound fast….as it pulled back. A smaller fish this, it was scarred up and cut up from spawning bites (lovebite from a pike anyone?)

This one actually stayed on the hook. It was around a couple of pounds in weight and although light it was quick and gave a fair scrap.

I got the by now dead Roach out and proceeded to remove the hook in short order. No onboard photo though as I was getting ‘CARD ERROR’ on the camera which took a removal of battery and card to reset. I carried on fishing for the tiddlers to the right of the cruisers:

And for the pike on the left of this cruiser.

I watched my pike float go down again, struck, felt a good fish and then off. Twice more this happened; I had a total of 5 dropped runs in all. I don’t know what the answer is but the single hook is not going to be a regular feature in my piking rigs that’s for sure.

The day was coming to an end and so I decided to make one last move back to the bay by the bridge to finish hopefully on another large fish with my last casts. The pike had gone off the boil ages ago and I was getting more of the same with my tiddler bash so off I went for the short paddle.

Down went two feeder rods, a couple of feet from the pilings, and I sat and waited for ten minutes. Then, a lovely sharp knock on the righthand rod and I struck…a decent fish this….solid and weaving but not fast, maybe no the chub I thought at first and nor was the bite quite the same either as it happened..

A pound or so of beautiful, quality winter Roach! A nice gold sheen, deep red fins…a cracker. Back it went and while baiting up to catch my last fish (I’d decided to knock it on the head at a certain figure) the other rod went. A cracking dropback and shaking bit saw my last fish of the day come cruising around either side of me

I paddled in, passing someone hauling out one of those beautiful Broads pike. I decided to go and take a snap for him after bringing the yak onto the slipway

I wasn’t at all jealous or anything…

He asked me how I’d got on. I told him about the 5 dropped pike and followed with:

That’s what it’s all about!