A Very Slow Morning At Beccles 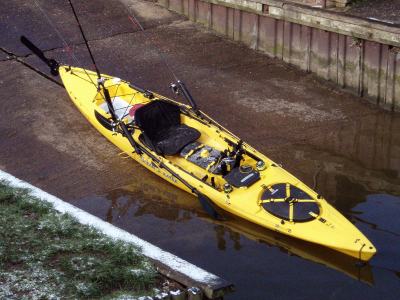 I had to take some photographs for college today and – surprise surprise – they involved being on the yak. So, I cancelled the morning session to do my snapping and made plans to be present for the afternoon session at 2m (knowing full well that I would only be required to be present for 20 minutes in the afternoon anyway, such is the nature of ‘self-directed’ learning on an art course). Of course being on the kayak without tackle is okay but I find it is so much better balanced with rods as I’m sure you’ll agree. Especially at anchor. So I took a little something along to amuse myself and launched from the slipway at Beccles Quay with the remains of snow and hail on the grass.

The cruiser is still moored where I usually tie up so I anchored off on the opposite side of my ‘hot-spot’. The current was not running very fast at all and the wind was a bit all-over so it wasn’t ideal conditions for fishing in this manner. It was cold too, and there were hardly any anglers around (and those that I spoke to hadn’t had a thing).

Five minutes or less and I got a thumping great bite!

It’s funny that – Gudgeon are tiny wee beasties but they don’t half take a bait forcefully. If only they got bigger they’d be a handful. Too small for livebaiting with I popped him back thinking things were going to be hectic. I couldn’t have been more wrong. Ten or so minutes later I managed to land another and a while later I got a dace – again quite small.

I put him on anyway and crossed my fingers even though I’d heard that the pike were not coming out right now.

This done, and with little happening, I headed down to the iron bridge to try for some decent Chub. I cast the lines in and waited.

And finally got a knock that developed into a half-pounder:

A beautiful fish Chub, and a good fighter – I’m really starting to get fond of these. I felt guilty rigging it for pike bait (swapping the other mini one) but hoped that it would at least not be in vain.

I had nothing more in the next hour there so moved around a bit. The anchor business was annoying me as I just couldn’t keep the lines tight and the necessary bend in the rod tips to detect bites properly.

I fished for a while longer and caught another baby Chub and some more Gudgeon before it was time to head home. Of course you always have to have that last cast and I was on 8 fish but wanted to go home on ten. One rod was out of action with a tangled up trace (been experimenting with a new type I came up with, needs work) so it was unlikely. But I had a couple of hard bites and some wriggles and finished a slow day on a high with a lovely little brace of Gudgeon! Lovely.

I loaded up and set off to college (pics were fine, got what I wanted. In five minutes) via my parents where I did as any dutiful son would do under similar circumstances – drank coffee and had a bite to eat. Cheers mum! 1 Dace, 2 Chub and 7 Gudgeon, and 9 days left of the season. Let’s see what tomorrow brings…..