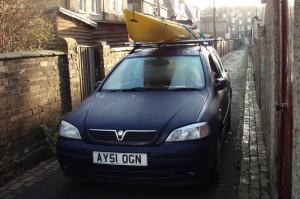 Right, I’m back in business. My new motorised kayak trolley has arrived and has been fitted with my new Thule bars/locks/roller.

I had no idea they did rollers until I was looking around for the best deal. I figured it was worth getting in the hope it was useful as frankly the Trident, rigged, is quite heavy at this time of year (not paddling as often or as far) and thus more of a struggle to load up. I was surprised that they are actually lower than the bars themselves but they actually work really well – I can slide the yak right up and then lower or lift it and slide it down with no real effort, comparatively. Recommended. I also got the longer bars so I could get both yaks on side by side. This meant that I then had to swear – followed by a friend milling longer slots into the underside in order to get them attached to the feet and the feet attached to the roofrails. I then swore again and went out to buy some drawn steel bar in a square shape so I could use it as a key to tighten them. Got there in the end though.

So anyway, I got the car loaded up with almost everything I needed (see later) and the yak on the roof. One minor niggle is that it’s hard work to make a tight grip on the bars as they are now – the old ones had pipe lagging on and this created a more secure surface – it could bed down into the foam and didn’t slip. I need to get something to replace that but without looking like some gaffer-taped pipe lagging as frankly £140 of bars etc shouldn’t be scruffed up like that. In the end I got it steady and safe and took my daughter to school. I then set course for the River Waveney at Beccles, a good spot for silvers – and being encouraged by having heard of good pike coming out over the last week or two.

It was 9:30 before I was in the water. Ten minutes before a chap had helped me get the yak off the roof (not necessary with the rollers but he was a friendly chap). He gave me some local gen as he is fishing here every week and he also had been doing well on the large pike. Lovely bloke – even more so when he gave me some maggots after I discovered that my maggots along with my groundbait (I’d put them together at home) were not in the car. Thank you mate, you saved me a lot of hassle. So, armed with two set-up feeder rods (I left them like that) with 4lb line and size 16 hooks and two spinning rods with 50lb braid and small pike floats I paddled out to my first mark.

So I went to my regular haunt and sat there.

An age in fact.

Then I missed a couple of bites.

But all things come to those who wait

I hauled in a Dace – first of the year and a PB of all things. It was small but usually they are smaller!

Now, I’m not a great fan of live-baiting from an ethical standpoint but needs must and it is a proven method of getting the pike on the end of the hook. A friend pointed out today – and he isn’t an angler – that if a pike is feeding it’s going to take a live fish from that bit of water anyway. Anyway, that’s by the by and Mr Dace was promptly attached to a livebait rig and swung into the river.

A knock on the match rod…

In came my first Roach of the year…I was doing well on the species here even if fishing was slow.

I unhooked it, put it on the other pike rod and swung it into the water. That’s when my other float stopped floating.

She was a beauty.

My biggest Yak pike to date.

I chinned her aboard after a bit of fannying about and set about getting the trace out with my forceps. Typical river pike she had taken the Dace down in one gulp and the hooks were down deep (it wasn’t a big bait as you can see) so took a little while and I was in a hurry to get them out and return her so didn’t take a picture or weigh here at this point – that could come later if I got a move on. But I did get a move on and when all was ready to get a pic and her weight…

You guessed it. She jumped out of my lap and into the water!

She was thick, she was toned, she was plump and she was full of spawn. I was after a twenty but don’t think she was near. But she certainly wasn’t a ten. With spawn I’d estimate her as being in the region of 15lb and certainly don’t think I’m over estimating. It was a lovely mid double and one hell of a nice fish. Corker!

I’d wound the roach in during the fight and popped it back down again. I’d retrieved the dace from the throat of the pike and had that in the footwell but decided that two bait rods out for pike was tempting fate so just dropped the roach down and cast out a match rod.

Straight away my roach got gobbled up and I was into a firm fish. I had it on for a minute or so and then it let go. Up came my roach, a bit battered but still alive and went back in. I’d dropped the fish and it didn’t come back.

Nothing did for a while actually. I missed a shy bite or two, moved position and failed to connect to a beautiful bite, went back. As both my baits were now dead I wasn’t confident of another pike. A virtually dead bream around half a pound came floating by and I tried that but no joy on that either. So I just carried on with two match rods.

Finally after missing a few more bites I got:

Species 4 for the day…

A beautiful river chub of a round 8 inches.

Of course the temptation was irresistible and five minutes later the little orange thing in the centre foreground went under…and stayed under.

Don’t you just love it when they do this?

That’s the first time I’ve got one in mid air and that’s actually a fluke – I was just trying to get a pic of it in the water. Like this:

Who you looking at, pal?

Now, normally I don’t bring them into the yak (used to last season but got some practice) but that’s because I fish with lures and they’re usually hooked in the scissors. However, with baits they tend not to be and so I stick an unhooking mat between my legs, chin the pike and get the forceps down its throat to remove the hooks. Duly done she went back in. Another thick, heavy and solid river fish she went about 7-8lb and was half the size of the first one.

Of course as far as I was concerned that was a good note on which to depart and so I took baits off hooks, hooks out of water, hauled up my anchor and headed in. a slow day but a great success – a Yak PB and two new species for the year (one of which was a PB). The chap who’d given me some maggots I was also cheered to hear had had a decent day – 3 pike, the biggest going to a shade over 21lbs. Now, what ever shall I do about those ready-mixed groundbait and maggots in the tub – they won’t keep…..