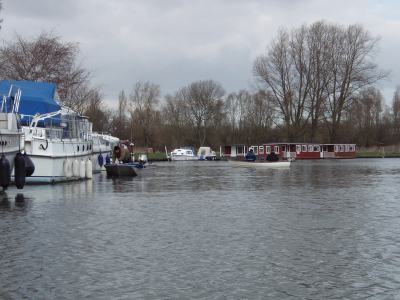 
After such a slow day yesterday I figured that today – windier and warmer – might bring the fish back on the feed and I was especially hopeful for the pike. I had already got a load of groundbait mixed up from the last session and added some more breadcrumb and a bit of flour to help bind it better. So, armed with the match rods and a pike rod I launched once more after the school run and paddled out to my usual spot.

It took 5 minutes before my first bite – another thumping great one – and I brought in the first fish of the day – a lip-hooked Gudgeon. This was followed ten minutes or so late with a second.

It took a while before the next bite and leaving it to develop I was rewarded with the first double shot of the day, bringing in another Gudgeon and a reasonably sized Roach – perfectly sized for livebaiting with and so it went on the hook. I had decided to give the circle hooks another chance and I cast the pike rod and settled back to wait for more action.

I’d like to say that action was constant and fast but the opposite was true. It was slow and it appears that the Bream, Roach, Chub and Dace shoals that have been providing such good sport for the past few weeks have now moved elsewhere. I continued to pull in Gudgeon here and there with an occasional juvenile Chub here and there.

I decided after a couple of hours to make a move and I decided to do so after one last fish. I was glad I waited as this came with a beautiful little Ruffe, a rare capture and only my second of the year. When it came out it had a deep yellow/gold sheen which had gone by the time I took the photograph. I remembered to spread the dorsal spines and it’s clear to see the family relationship with the Perch – another favourite of mine.

I moved to try and pick up some of the larger Chub from my other usual haunt. Paddling downstream with a keepnet (the first time I’ve used one in the yak and the first time I’ve used one in maybe twenty years) was hard work – the amount of drag was actually more than paddling with my anchor out here (where it works as a mud-weight rather than a true anchor) but I got where I wanted to go soon enough and set up, cast, and sat back and waited.

After an hour or more of waiting with not a single bite I decided enough was enough and headed back to the boatyard area. Fishing had by now died right off and bites were very few and far between. When they came and I struck in time they were more of the same – a real Gudgeon party was going down! I was not the only angler struggling – only one pike came out that I heard of and very few other species. There were a few dory’s (one of which ran, faster than allowed, straight over my pike line, snagged it and took a load of braid with it but fortunately I got it free and retried line, trace and bait. Tossers.) out and plenty of poles along the bank but no-one was doing much at all so I guess I did well when I finally packed up after my last fish – number 21, another Gudgeon!

Total for the day was 16 Gudgeon (my most of the species in a day) 2 Roach, 2 Chub and 1 Ruffe. Total weight if I’d been in a match would have probably been half a pound or less!

Slow, but fun – and with 8 days left of the season I’m glad I was able to get out.