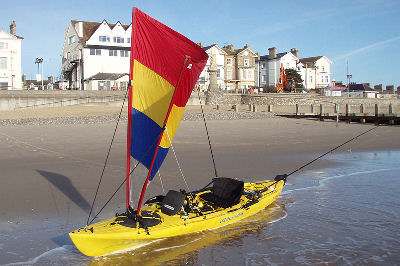 Monday is a free day for me at the moment but I’m without a car that day so it’s sea or nothing. Last week, with the fog, meant nothing so today just had to be sea. Unfortunately I can’t get fresh lug on a Monday and don’t like keeping it to go rubbish from the weekend so I was relying on some frozen/thawed/froze/thawed/frozen/thawed black lug and some squid of the same ilk so wasn’t really expecting to do a lot today – just get out, have a crack at it and top up on sunlight and fresh air.

Having phoned the coastguard, 9am saw me on the beach with a pretty flat sea and light wind. I had checked the forecasts for weather, wind and surf beforehand and had taken the sail as I was intending to head south with the tide (HW 12:01) and come back with wind and tide using sail power for the trip home. Beautiful sunny day it was, and not too cold. I was using my spinning rods as my normal sea rods have got cracked and damaged rings now so are avoiding the tip for some planned re-entry drills with rods out when it’s warmer and I have some companions in case of need. Might as well use knackered rods for that eh?

I paddled out about a mile and arrived in 20ft or so of water between two sandbanks. There was a fair chop over them so I paddled against the tide through the northern one and anchored up, fishing towards it in the hope something would be around. Something was.

Enough weed for one hell of a cake! After an hour of this I decided on a move and so headed slightly inshore off the CEFAS building at Pakefield – in the hope some of my friends there would look out of the window and get the hump at being stuck inside! I doubt they’d have seen me though as I was still probably ¾ mile out but these thoughts amuse me. I should have phoned really… anyway, I put some baits down, two hook flapper on one and two hook flapper and flowing legered pennel on the other. And waited.

It took a while and then I got a lovely knock. Reeling up it felt quite feisty and sure enough a plump codling of around the 3lb mark came up, gave me a grin, and dropped off. Dinner most definitely not served!

I had my old Shimano TR100G’s on as well, these are cracking reels but are starting to feel a bit rough now after a decade or more of use. They could probably do with a good service and some replacement parts but frankly they can be replaced cheaper. They still work alright so I guess they’ll do for choppy bottom fishing where they take a hammering. They responded alright to the next knock, but nothing was hooked so down the bait went again.

15 minutes later another knock and this time I brought up a fish – a small codling, undersized but with the hook well down in its gut.

Using forceps I tried to get it out but proceeded to snap the shank of the hook. It wasn’t going to survive so I cut it up for bait. A pity as although I don’t mind knocking fish on the head I don’t like to do it when it’s not necessary.

The wind had picked up by now and I was in 2-3ft+ swells, anchored from the rear and with wind over tide. The waves were coming from my rear quarter / beam and I occasionally got some water into the cockpit but not much. I had a few more knocks but failed to connect with anything else and around 12:30, with slack tide making tight lines difficult to keep) I broke down the rods and used the rod pod for it’s intended purpose (for once), hauled up my anchor (knitting the line into a cardigan) and got everything stowed for the sail in. It was getting a bit uncomfortable now (although not worryingly so) and with use of rudder and paddle I got in position for the off before strapping the paddle down and ‘hoisting the mainsail’.

Apologies for the tilted horizon, but 7MPH+ in a 3ft swell with a yak that is not responding to the rudder only allows a quick snap! You can see from the bow wave an idea of what was happening. I went downwind and off both sides, into the beach, out to sea and parallel all for good measure and had a blast. At one point though I thought I was going to spill – I was running along the face of a wave and a gust tipped me up, filling the starboard side of the cockpit to the brim and making me lift a leg and lean the other way to stay in, which I did. Suggested mod for the Trident from this being a 5th scupper hole as per the Elite purely for the transducer so I can drain the water (the thru-hull doesn’t allow draining very well). Having recovered, I carried on

I headed back out to sea to go around the Claremont Pier and then turned in again and ran along and up to my launch point, coming into the sand on the sail, the rudder working again in water that was a bit calmer than I had sailed through. It was a blast! The cleats worked well and really took the strain off my hands – 2.2 square metre sail and 15-20mph winds with higher gusts being quite a powerful force. I kept my hands on them still so that I could adjust as needed and if I went over I could yank them out of the cleats to collapse the sail to save being towed to Ijmuiden!

Once back onshore, without lunch, I took one last snap and trundled home. I had a great time – I’d managed not to blank and had 4 hours on the sea, although it’s the first time I’ve come in earlier than planned.