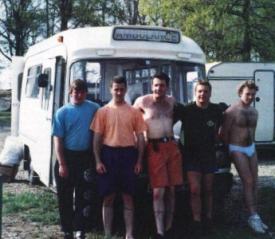 You should have seen the neighbours’ faces when I rolled up onto the drive of my parents’ house in my newly acquired ‘France Exploration Vehicle’.

"You’ve done some strange things, boy, this is just about takes the biscuit", were my mother’s first words.

How could I resist it? I needed a van to take myself and a few mates to France; hiring would cost a fortune and buying a ‘proper’ van which would be reliable was also too expensive. For STG 350, what better choice – an old ambulance which, hopefully, I could sell and get my money back on once the trip was over?

All of us who were going were pretty skint at the time, so the only way we could afford to go was to keep the costs to an absolute minimum.

With little over a week to go before our intended departure, we all mucked in to get the ambulance into shape. Most of the seats were removed so we had plenty of room for the tackle and bait; a new tyre was needed, so every scrap-dealer in Essex, was searched until we found one and, of course, we need music. By the time the stereo was in it sounded like a mobile disco!

My good friend, Martin Kowal of SBS kindly did the honours with a bulk deal on rock hard Strawberry Jam boilies, via Essex Angling. Oat groats and pinhead oatmeal were the chosen particle; mixed together they become porridge-like and settle gently on bottom silt, as well as creating a milky, almost groundbait-like effect when stirred up by moving fish / bottom tow. Oat groats and pinhead oatmeal require no boiling, easily accept flavour and colour. Soaking in a bucket of water for eight hours is all that is required so they are obviously a good choice when no proper facilities are available on remote waters in France. (And they are cheap!)

The lake we had chosen to fish on this particular occasion was the Puits in the Loire Valley. It’s fairly large lake, damned at one end and, I would guess, somewhere in the region of 300 acres. I’ve fished it on numerous occasions before, with fish to the low 30 mark; bigger fish are present with a rumoured mid-50 caught by a Dutch angler, but I can’t confirm this. Certainly, I’ve seen fish caught to 36lb, but never any bigger.

I don’t like going on rumours, as I’ve fallen foul to this before but that chance of a magical 50lb fish was obviously always in my mind.

In the event of the Puits not throwing up any fish, we had circled a stretch of the nearby River Loire, which had produced some nice fish for us the year before. It’s always worth having a back-up venue in case of problems, or it may be that your first choice is just not productive.

With the ambulance loaded to the gunnels with gear and food, we set off to catch the night crossing from Dover to Calais. I’ve always found it better driving through the night not only because the roads are much quieter, but also because it allows you to arrive at your chosen venue during daylight, giving you plenty of time to try to locate some fish, select an appropriate swim and set up your tackle.

Locating the fish is obviously the most important factor. On the Puits it’s not as difficult as some other waters because there are a lot of fish who seem to do regular patrols rather than staying in localised areas.

The other (probably most important) reason for driving at night on this trip was the fact that I didn’t want to be seen by too many people hurtling across France in an old ambulance – you can imagine the looks we were getting!

After a five hours drive, we eventually arrived at Puits at about 5:00am. It was a marvelous sight, with the mist just lifting and only a couple of other anglers fishing.

After some breakfast, we spent the entire morning walking around, looking for signs of fish, questioning the other couple of anglers and setting up the boat / echo sounder etc.

Rather than fishing together and only covering a limited area of water, we opted to split up, two of us, (myself and Kenny) fishing from the dam and the other three (Mark, Russ and Nigel) from an area on the beach in front of the camp site where we were staying at night.

Night fishing, at that time, was not allowed on the Puits so our plan was to fish from first light to just after dusk and then return to the camp site to discuss the day’s events.

Even though night fishing was obviously very tempting, patrols by the local Garde de la Peche were too frequent and the consequences of getting caught too severe to risk it.

We spent a couple of hours out in the boat with the echo sounder and marked an area at a range of about 150 yards where there was a large plateau running the full length of the area in front of us. The plateau was heavily baited with the groat and pinhead oatmeal mixture and 10kg of boilies.

With so many small fish, we did not consider the baiting too much as it would soon be mopped up by the first shoal which came across it.

The other three lads had found an area much closer in, at about 80 yards range, close to a weedbed and snags with a very large, clear gravelly area in front of them in about 8ft of water.

They also baited the area heavily with groat and pinhead oatmeal mixture and 15kg of boilies chopped in half.

On the plateau where Kenny and I were fishing there was a light covering of bottom silt, so I opted to use the rig as sketched, which I have used to great effect in the UK on some of the silty Essex waters which I fish.

Hookbaits were double 20mm pop ups, anchored down / attached to a 4oz lead. I had soaked them in a mixture of Strawberry Jam flavour and Mainline oil for a minimum of 4 hours before using.

By late afternoon, we finally had all our baits rowed out to the plateau and, with only a few hours fishing before dusk, we weren’t too hopeful; it was first light we were waiting for.

We had no action that evening but, on returning to the camp site, were pleased to hear that Mark and Nigel had both caught mid-doubles.

Just before first light, both my and Kenny’s baits were in position in front of the dam. We had made sure to make as little disturbance as possible when dropping the baits in, in case there were still fish in the area. A breeze had been pushing towards the dam since dusk, so our confidence was sky high.

Kenny was the first of us to catch from the dam with a mid-double shortly after 8:00am, then things went crazy.

Within half an hour, all five of the remaining rods had caught, all doubles.

No matter how fast we rowed the baits back we couldn’t suffice the carp’s appetite and, in the end, we poured loads of bait in at castable range in the hope that it would pull the fish away from the plateau so that we could cast to them, rather than the continual rowing.

It worked and, by the end of the first day, we’d caught literally dozens of mid-doubles and singles. Not exactly what most of us go to France for, but great fun, especially with two rods going at once on some occasions!

When Kenny and I returned to the others, they couldn’t believe it. They’d caught four fish between the three of them so, needless to say, we would all be on the dam in the morning.

Kenny and I had piled a rake of bait in the previous night so our confidence was again sky high. Rather than rowing out the baits we cast to, I suppose, the 100yds mark.

Action was slower than the previous day but we still managed to catch several fish each hour between the five of us.

Much as I was enjoying catching, I knew it was going to be difficult to get a big fish with a small ones mopping up the baits so quickly. I discussed the matter with Kenny and we decided on a total move away from the area to a much deeper area at the other end of the lake.

The next morning we spent a couple of hours with the echo sounder, looking for likely areas. It was fairly flat in about 15ft of water. We managed to locate a couple of bars at about 70yds, other than that, nothing.

The bar was baited lightly with groats and a few boilies, we also baited a reedbed to our right, which we felt may be visited by fish to get cover during the warm afternoon.

We’d had no action all day; just before dusk, as we were about to reel in for the day, Kenny’s weedbed rod was away and he managed to extract a wonderful fish, weighing in at low 20.

The next day, Nigel moved to the new area with us and we all managed to catch upper doubles – not monster, but the average weight was creeping up.

Mark and Russell had stayed near the dam, again catching a constant stream of singles and doubles.

The next morning was a memorable one for me. I cast a bait and six boilie stringer to the marker and flicked the other two rods to the reeds to our right, both with PVA bags full of groats attached. No other free offerings were put in.

Kenny and Nigel had opted to fish slightly to the right, casting to the edge of a reed at about 60yds.

After only a couple of hours, the bar rod was away. As soon as I pulled into it I knew it was a much better fish – slow, confident plodding as opposed to the erratic behaviour of the smaller fish.

Kenny and Nigel both joined me to watch the battle. After what seemed like an eternity, Kenny slipped the net under a terrific fish. I was well chuffed after the constant stream of small fish; our decision to move had paid off nicely and my prize was a mid-30 mirror. We kept our tactics the same for the last couple of days and caught a few more fish to the mid-20 mark.

Mark and Russell, on the dam, had nothing above 20 but their tally at the end of the week was incredible – I think they gave up counting in the end!

It’s a difficult decision to move when you are catching well sometimes it’s a decision which pays off nicely.

The old ambulance did us proud on the way home, only breaking down once because of leaves in the fuel line… the mind boggles! I even managed to make a profit on it when I eventually managed to sell it!