From The Privvy – Chapter Thirteen 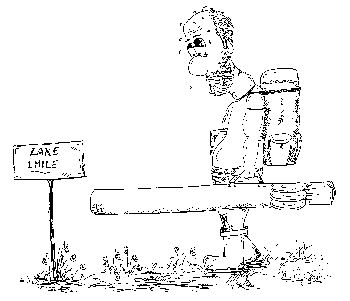 Home » From The Privvy – Chapter Thirteen

I have only fished Broadlands three times and to be honest I don’t like it at all. It’s too crowded, too artificial and too heavily stocked with small fish for my taste, but a lot of people do seem to like it. I haven’t fished it for a few years, but when I did the fishing was very easy, and as long as you could manage to get your hookbait and feed in the same area you would get takes.

On my second trip to Broadlands I went with a few friends from Ashford and we set up along the top island. Next to us were three anglers from Reading who had already been there for a couple of nights, but only one of them had caught and he had had several. I started to catch fish as soon as I cast out, but my friends remained fishless for the whole two days we were there. At the end of the session, it was only the one angler from Reading and myself who had caught anything and we had both had more than a dozen fish each, despite the other anglers fishing as close to us as they could get. I think this demonstrates the importance of getting your groundbait right, not only the position of it but also the quantity used. Even on very easy waters, if you get it wrong you won’t catch very much.

On the first day we were there, I had a take that when I struck pulled the rod over and held it there. The fish moved slowly along the side of the island and I couldn’t make any line on it. I just had to hang on and hope it didn’t get snagged. At the time there was only one fish of any size in the lake, a thirty that had recently been purchased and put in, so the small crowd that gathered was expecting to see something worth looking at.

Unfortunately they were disappointed, for when the fish was landed, far from being a big carp it was a pike of about twelve pounds, lassoed around its middle by my hooklength! The hook was neatly twisted in the mainline forming a slip knot. As the pike was lifted from the landing net, it opened its mouth and a trout of about a pound fell out! So despite having swum around for about five minutes attached to my line it didn’t feel any need to part with it’s lunch. A very strange fish indeed!

The next closed season, I returned to Broadlands with another friend and quite coincidentally set up next to the same three anglers from Reading again. After casting out, I started to catch fish immediately and had about six by lunchtime, all of which were small, so I was quite surprised when I had another take and hooked a fish that fought back. During the playing of this fish I felt the hook slip and eased the pressure. When the fish was landed I went to take the hook out but couldn’t find it. A closer examination showed that the hook had gone right through the fish’s bottom lip and had snapped half way down the shank. It was only the knot to the eye of the hook preventing the fish from pulling off. The carp weighed twenty and a half pounds and was at the time one of the biggest fish in the lake; it was certainly the unluckiest!

A few minutes after the twenty was returned I had another take which again pulled hard, not a carp though, a pike of about ten pounds hooked through the tail! I saw one of the anglers from Reading give one of his friends a sheepish look and they told me they were going to move further round the lake. I think they thought that they would be doomed to blank if they stayed next to me. After all, not only had they seen me land a twenty pound carp without the need for a hook, but also two double figure pike, neither of which had even tried to eat my bait!

Later that night I caught an eel of about a pound. As I swung it in, it fell off and must have landed right on the nerve centre in the tail that I have never been able to find, because it went as rigid as a stick. No matter what I did to it I couldn’t make it bend, so I put it in the margins and after a couple of minutes it swam off, apparently none the worse for its experience.

I packed up the next morning and we went home. The way things were going, almost anything could have happened if we had stayed!

There was never a time during daylight hours while I was at Broadlands that there wasn’t someone wandering about with tackle and asking all and sundry if anyone had caught anything. During my second trip to Broadlands an angler arrived in my swim carrying a pair of cane MK.IV’s complete with Mitchell 300’s and four inch lengths of peacock quill for floats. It all looked very authentic, but the tackle was pristine and obviously assembled for effect rather than function.

"Had a few have you?" he asked,"Only little ones," I replied. He then sat down right next to me and cast his rods towards the island! It was painfully obvious that he couldn’t handle his tackle and I asked him as politely as I could if he wouldn’t be better off finding a swim for himself rather than using mine. He told me that the swim where I was fishing was for casting to the island and the bit he was sitting in was for margin fishing. I suppressed my first thought which was to clean his ears with a bank stick and spent the morning making nasty remarks to him, all of which he ignored. He reeled in at about lunchtime and packed his tackle away, said goodbye and left.

Later that afternoon one of the Bailiffs came round and asked where old ‘whatever his name was’ had been fishing, as on his way out he had told him that he had caught seven fish to nineteen pounds. I told the Bailiff exactly where the old w***er had been fishing and that he had caught nothing, I also told him that I thought he had been on a day drip from the local asylum and hopefully wouldn’t be allowed out again for a while. The Bailiff seemed very surprised at the way I spoke about his friend and told me that the old t***er had caught dozens of fish from the water, so he had no reason to disbelieve him. He then suggested that I was taking it a bit too seriously!

I have never been back to Broadlands, but my friends tell me it is a much better fishery these days. I suppose with anglers having a wider variety of waters to fish in the closed season now, it isn’t so crowded. But unless the anglers who move into the swim next to you and cast onto your feed every time you get a take have gone, I don’t think I’ll ever want to go to Broadlands again.

Mind you, with my luck there, I’d probably catch a burbot!