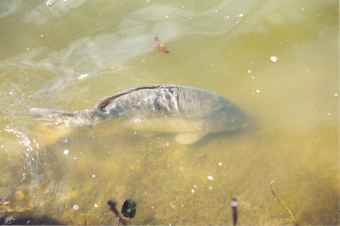 I have fished the marshes of the Pevensey levels and the Romney Marsh since the early fifties and remember the Wallers Haven when it used to run by the garden of the Star Inn. In those days, Carp were very rare and the Wallers Haven had a different name, it was called the Pevensey Sluice. When I first started fishing the Pevensey Sluice, it was opposite the Star Inn garden where the murky water ran deep before it ran over a sluice at the humped backed bridge.

There was little chance of hooking a Carp and the best my school friends and I could have hoped for was a Bream, or Roach, but more often than not it was a bootlace Eel that tied our tackle into knots! Later, though, we were to learn that the Pevensey Sluice held Carp, but that was about as far as it would go. We never caught one, or saw one. Presumably, the Carp had been in the Sluice for many years and, like the Carp of the Rother, were present in the last century. It was a different story on the Romney Marsh, for when I first fished the White Kemp in 1953 at the age of thirteen, I actually saw two Carp taken by an angler fishing with lobworms. He was fishing with a huge cork-bodied float and he landed two commons of 5lb and 7lb, plus a 5lb Pike. Just how you would have landed such a huge fish on my crude tackle, I do not know, but how I longed to catch such a fish.

Many years later I used to fish in the competitions run by the Hastings, Bexhill and District Freshwater Angling Association on the White Kemp and found a way of locating and hooking these wildie type Carp. The competitions were rovers, so you could fish where you liked and there were miles of bank open to you. I soon found that the further you walked, the more likely you were to have the area to yourself and if a particular part of the drain was overgrown with weed and reed, then you could be certain you would be the only one fishing it.

It was during one of these competitions that I discovered Becketts Sewer, an overgrown drain that ran into the White Kemp. Part of it was so overgrown that reeds grew from bank to bank, though there were gaps – holes in among the reeds – often in the middle and, although I didn’t know it at the time, the area was alive with Carp. The whole stretch was heaving with life, the reeds swaying and shaking as fish moved through or fed from the snails on the stems, insects were hatching, dragon flies were everywhere and the sound of their beating wings was quite amazing. Bubbles were rising from the mud, a clear give away of feeding fish, most likely on bloodworm.

I wasn’t really expecting to catch Carp and, to be honest, was actually hoping for a Tench since an older angler had caught one from that area the week before. Tench in those days were fairly rare in the White Kemp and Becketts. Never the less, after picking a swim which was little more than a hole in the reeds, perhaps 6ft x 4ft, I threw in some groundbait – mashed bread – and after tackling up with a piece of bread crust on float tackle, it followed the groundbait. The float was swan quill and cocked by a single swan shot.

It settled in the swim in the half-cocked position and I sat back behind the reeds awaiting events. I didn’t have long to wait, the reeds started to sway and the float nose up from the bottom. The float jagged to one side a couple of times as a fish knocked the line and then it rose up in the water and lay flat only to stand up again, this time moving away from me as it went until it slipped below the surface and I struck.

All hell let loose, the reeds parted and a bow wave that cut from bank to bank disturbed the tranquil dyke and my rod was being dragged from my hand. It was obvious from the start that I had hooked a Carp, which I landed. It wasn’t large, just short of 41b, I believe, bet the excitement of that capture from a narrow reed infested drain has remained with me all my life and that was 1961.

After that first capture I caught lots of Carp from that drain, I also lost a lot when my line parted from my Richard Walker Mk IV rod as a Carp broke me off on the reed stems.

I soon discovered that, by holding the rod high, I stood a better chance of preventing this, but it certainly didn’t eliminate the problem entirely. Since those days I have caught lots of Carp from the marshes of Pevensey and Romney on all types of baits and rigs. Most of them have been in single figures, but then many of the drains only hold common Carp to 8lb, though this is slowly changing.

Some of the drains I fish for Carp are hardly ever fished by other anglers and the fish can easily be taken on sweetcorn. I generally fish a paternoster with a 1/2oz weight, sometimes less. Heavy leads are unnecessary and likely to frighten the Carp if they are in the near vicinity when casting. Often the best conditions for fishing these drains is when there is a strong south west wind blowing and it’s raining. Either that, or still overcast days when the air is heavy and it threatens rain which never comes. The Carp often feed well in these conditions and it’s not unusual to catch four to six fish in a short session. Generally they are not large Carp, usually between 6lb and 10lb, but as often as not they are commons and fight like the very devil.

Conditions aside, it doesn’t matter how good or bad they are, the most important aspect of drain fishing is location. If the Carp are literally throwing themselves on the hook, you won’t catch them if you are in the wrong place, so it pays to be mobile and search for them before starting to fish. They often give themselves away by jumping, bow waving, or pushing their way through the reed and weed. Their backs are sometimes out of the water and a stealthy approach along the bank will give you a chance of spotting them without spooking them. Do not wait until you see them before keeping quiet, it may be too late. It always pays to keep a low profile and walk slowly with every footstep taken without sound, or vibration. It always amazes me how even some of the most experienced Carp anglers arrive at a water and make no effort to keep either quiet or out of sight of the fish. Some of these anglers catch a lot of big fish, but usually they have been at the water for a long time, sometimes several days. Had they been more careful in their approach they may have caught straight away.

When fishing these marshland drains, I generally do so for short sessions and quite often hook a fish within minutes of casting in. This is only possible because I have chosen the right time to fish and, instead of just casting into the first swim which takes my fancy, I have taken the time to find where the Carp are. These Carp are rovers and will travel great distances in a very short time. Friends and I have actually watched Carp moving up and down rivers and drains bow waving from bank to bank. They sometimes cover a mile or more in twenty minutes and when they are in this mood they can rarely be caught. Just occasionally one can be intercepted, but usually they are not interested. If on the other hand the Carp are moving slowly in their margins they are
sometimes sucking in snails or insects from the reeds, then they can be tempted with a surface or sub surface bait. However, to return to location, it is not so much the moving fish you should be searching for, but feeding fish, or at least those that are keeping to a smaller area. Rolling, jumping, swirling and bubbling Carp are the ones to look for. Sometimes, because many of these drains are very shallow, the Carp show themselves when their tails lift out of the water.

The natural food for these Carp are almost certainly bloodworm and snails. The bottom of these drains are heavy in thick black silt and you need only to visit the waters on a warm summers evening to see the hatching midges. There are swarms of them and they all come from the bloodworms in the silt. There are other nymphs in the water such as Damsel and Dragon fly and the Carp must to some extent feed on them. If it were Trout that we were seeking we would be looking very closely at this food source, but we must remember that all coarse fish will feed on whatever is available to them and those things I have mentioned make up part of the Carp’s diet.

Bubbling then will give away the whereabouts of Carp feeding on bloodworm in the silt, but it is not always possible to detect which bubbles are from feeding fish and which are marsh gases being released naturally. This is difficult and we all make mistakes, but if bubbles come up in different places, then they are more likely to be Carp than if they keep coming up in the same spot, especially so if it happens over a period of days. Although many of these waters only hold Carp to 8lb or so there are still drains that have really large Carp. The waters that hold big mirrors, some of them huge, do exist. Indeed rivers all over the country have uncaught Carp in them. The drains and dykes that have really large Carp are usually the ones that hold very few Carp and it takes a while to sort out which they are.

There is still a close season on drains and rivers and the best time to find out which water holds what fish is during that time. If the weather is warm during the spring the Carp may spawn early and that is probably the best time to see just what fish are in that particular water. It requires a certain amount of effort, for just one visit to a water is not usually enough and you may need to return half a dozen times or more before you have any idea of what it holds. And you may need to walk several miles to find the fish in the first place. If you are lucky enough to catch the Carp spawning then you are likely to see the size of the fish as they thrash and splash about in the marginal reeds. However, they may not all spawn in the same area or at the same time, so it’s likely you will not see them all. Never the less, it will give you a good idea of the average size. I will not enlarge any more on the tactics and baits to use when after these Carp, for they can be caught on a variety of methods and baits, but the one thing to keep in mind is to be versatile.