by The Barbel Catchers Club 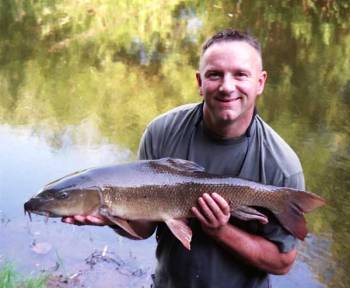 Back in the late nineties when I pretty much dropped my other girlfriends like pike and carp to concentrate on my one true love, ‘barbel.’ I was very much a fan of braided hook-lengths, hair rigs, pastes and boilies; my only link at the time with my early barbel exploits, was the long drop bobbin which I’d used back in the 80’s on the Thames. All of the double figure Bristol Avon barbel, which I caught before joining the Barbel Catchers (which was around six at the time) were all caught on boilies and in 1998/99, I probably hadn’t used luncheon meat from the tin for over ten years. After joining the Catchers in 2000, I was really very surprised at the number of anglers in the club still using meat based baits successfully and I started to make good use of curried meatball when roving on the Bristol Avon. Since then I have drifted in and out with meat derivatives as baits having had some success with hair rigged half cocktail sausages (the Asda spicy ones) on the Severn and hair rigged sausage shaped meat (using an apple corer) on the Thames in 2001- 2002. In 2003, when back on the Severn, I reverted back to chopped boilies, the method feeder and three inch mantis hooklengths. Not because I thought boilies were better than meat as a bait, but mainly due to my confidence using them.

What really did capture my imagination was how Martin Cullen, also of the Midcot Region of the BCC, would buck the trend by sticking with plain meat when all and sundry were drifting away from meat to try the latest pellet fandango. His success rate with large pieces of meat was equal to or dare I say even better than many others in the region using more modern baits. That’s not to say that Martin ignored pellets or boilies because he did use them and still does from time to time on the Severn and Teme. The fact is however, that Martin was able to achieve very successful results, catching some terrific fish using large pieces of meat on stretches of river that had received increasing pressure from other barbel anglers over the preceding years. I was intrigued by this and was keen to learn how Martin achieved his success.

Last year (2004) I fished the Teme at Eardiston on a Midcot Region Fish-In and tried what I thought were large pieces of Spam on a long mono hooklength of around four feet. It seemed strange taking a step back and fishing such a basic method of legering but it worked and I landed my first Teme barbel of 8lbs on Spam. I know that the Teme has a bit of a reputation for being easy compared with other rivers and you could say that the reasonable head of fish combined with competition for food is a major factor as to why the Teme fish hang themselves on occasion, yes even on meat!! However, you could also say that in the last four or five years, the Teme fish have seen so much pellet, that the reason you can catch on meat is because they are not as afraid of it as they were because fewer people are using it. I also like to think that it’s the size of the bait, which I now use that offers an irresistible attraction to barbel because you don’t get much more protein and fatty acids packed into a bait than in Spam. Luckily for me Martin came up to my swim at Eardiston and looked at the size of my bait. “That’s no sodding good, give us yer tin of meat ‘ere.” The size of bait Martin stuck on my hook was big. I’d been used to putting a bend into the rod on the odd occasion but couldn’t remember the last time a hook-bait did it! This was an eye opener for me. I thought the golf ball sized paste baits I’d used in the past were big. The biggest fear I had was burying a size 6 hook in a two or three inch bait, I mean how the hell is that going to catch in a barbel’s lip without the hook-point protruding from the bait I thought to myself. Another eye opener came in the next half hour when a four pounder snaffled it and with a perfect hook hold, so all fears allayed. This does make you think how big a bait you would need to try to deter the four pounders. I think I landed around 26 more fish including five nines to 9lbs 5oz on large meat baits over the next six or seven sessions on the Teme and with a new river best I was a happy soldier.

This year (2005) I’ve made a start on a different stretch of the Teme. Opening day June 16th was slow as expected, but it was a large piece of spam that saved my day dropped into swirling water around a typical Teme boulder and into a deep gully. Bang, the rod hooped over, the hook pulled through the Spam into the barbe’ls bottom lip and an immaculate five pounder was soon in the net. My fishing partner Dave Cooper, also now in the Catchers, came over with the camera to take one of those momentous shots (well it was June 16th) and that barbel is my first ever on the opening day of the season (helps if you go fishing on the 16th). I think Dave was probably more interested in the specimen size of bait I was using. Since then, I have managed a few more fish from the river on large pieces of meat including a new river best at 9lbs 7oz. What I have noticed understandably is that some barbel, although not all, will still treat meat with some suspicion, picking it up, moving it a few inches or a couple of feet and then dropping it several times. In these situations, I have found that a lightweight long drop bobbin like the one’s I used back in the 80’s (and which Martin also mentions in a previous article on the Barbel Catchers WebSite) can be useful. The barbel will lift the bobbin two or three feet almost to the rod butt two or three times or more before finally screaming off with the bait. My first choice however, is to touch leger with an open bail arm, rod point following the direction of the line into the water, which allows the barbel to touch, pull or take several feet of line without any resistance. When the barbel tears off confidently, I give it a few seconds, clamp my fingers around the line, close the bail and tighten up, by which time the rod has hooped over and the hook has pulled through the meat and into the fish. There have been times however, when the barbel have screamed off 5 yards, only to drop the bait again as soon as I have tried to tighten up. Bastards!!! The problem with this on the Teme is that 5 yards further and they’d be in a snag or overhanging sunken tree before you could turn them so you can’t always just leave the bait where they dropped it and start the process over. Another challenge to overcome!

Having considered all of the above, I can’t help thinking that I’ve almost come full circle. Although not exclusively, I’m now more often than not in the right conditions, using meat directly on the hook, running legers, long hooklengths and zero resistance. If it wasn’t for the fact that I no longer have a creel, an aluminium landing net handle or a yellow keep net, I could be back fishing in the 1980’s or even 70’s (am I that old!!). I know that’s simplifying things a little but I’m sure you know what I mean! The funny thing is that I get so much pleasure with this method and as simple and basic as it is, I am rediscovering that legered meat fished intelligently is still very effective at putting fish on the bank in spite of what ‘the people in the know,’ might say to the contrary. As the pellet phenomenon of the millennium starts to fizzle out on some stretches of river and this is happening right now due to blind over use of pellets, perhaps it’s worth taking a look back at traditional methods and baits and
updating or personalizing them. Meat might not work everywhere, but changing how you use it might make a difference. It might not always single out the bigger fish, but how many other baits realistically do that anyway. One things for sure, you will definitely have a lot of fun along the way grasping and developing the technique to suit your own style of fishing.

N.B since writing this article five weeks ago at the end of June 2005, Paul has now landed five double figure barbel using this method, with the pictured fish a new river best weighing 11lbs 7oz.

If you’d like to find out a bit more about The Barbel Catchers Club, please click here.