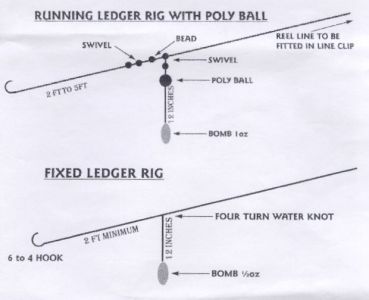 I have written it before and will, no doubt, do so again – the simple things are often the best. Complicated rigs will catch fish, but then so do simple rigs and you cannot get anything more simple than a rod, reel, line and hook, though I suppose you could even do away with the reel, except that you would need stronger line and wouldn’t be able to cast.

Over the years I have caught thousands of fish with just a line and hook, rod and reel. Many of them have been perch and some have been good perch, but although it is a very effective way of catching perch, I wouldn’t recommend it, except in exceptional circumstances. The reason is simple, perch belie their appearance, for beneath their camouflaged armour plated exterior is a body that is vulnerable to disease, bad handling and deep hooking.

Disappeared
Any angler who has caught plenty of perch knows this. How often have you hooked a perch deep, managed to get the hook out, watched it swim away after you returned it only to have it flapping on the surface in distress five minutes later? This is generally the case with small perch, but large perch keel over just as easily and for this reason it is not a good idea to free line for them unless you can be sure you can keep in constant contact with your bait and strike early on a take. Many a good perch water has been ruined because anglers have deep hooked it’s residents and I believe that was the case with Furnace Pond, the water which produced the British record. The perch disappeared and most anglers believed it was the perch disease, but a number of really big perch were found dead with hooks in them, some of them were trebles. So although free lining can be a very effective way of catching them it is likely to result in deep hooking especially if a fish moves towards you when it takes and it does not register on the indicator.

A rig which I used extensively and which I find good for livebaiting, deadbaiting and worming, is a paternoster in reverse or fixed ledger. Once again it is very simple, a length of line about l2inches long is tied to the reel line at least two feet from the end by a four turn water knot. On the short piece of line I tie my weight which is generally a bomb of about half an ounce sometimes smaller and on the reel line my hook, usually a 6 or 4.

Sometimes I make the hook link anything up to about 5ft, though the longer the link the more difficult it is to cast. When worm fishing, I pull a loop of line from between the first and second eyes of my rod and fix an indicator to it, but I do not keep it long, allowing about 15 inches of line to be taken before striking.

Using the same rig for deadbaiting and livebaiting I make the indicator loop much longer, but this depends on the size of the bait. The smaller the bait, the shorter the loop. In fact, if the bait is minnow size I consider this similar in size to a lobworm and strike accordingly. Perch do have very big mouths and can swallow a bait very quickly, so early striking rather than later is preferred. The hook link and the ledger link can be adjusted to meet individual requirements. I must also point out that I lip hook my baits whether they are live or dead.

Paternoster
Another rig I use which is similar, but a little more complicated, requires the use of a poly ball and a couple of swivels. I use it when I want to lift the bait off the bottom, perhaps because of twigs, or weed that is on the bottom. The difference is that instead of tying the two pieces of line together they are joined by two swivels. Firstly, a swivel is tied to the weight link, so the 12 inch piece of line has a weight on the bottom, then a poly ball is threaded onto it and on the other end is a swivel. The swivel is then slid onto the reel line followed by a bead. Then the hook link, of whatever length I decide to use, has the hook one end and a swivel the other. The other end of the swivel is tied onto the reel line. You can now see that what was a fixed ledger, or paternoster has become a sliding one, but to get the best from the rig you will need a heavier weight which stays put when a perch takes, an ounce is usually about right.

To complete the set up the rod is placed on two rests (buzzer optional) and the line is pulled tight and placed in a clip on the rod butt. The bale-arm is left open and an indicator is fixed in between the first and second rings as usual. When a perch picks up the bait it pulls the line from the clip and the line runs free from the reel. I usually allow it to take about two yards of line before striking, but again it depends on the size of bait. With a very small bait it pays to strike early. When I want to fish a bait higher in the water, I use a paternoster float rig which in deep water can be sliding, though strangely enough I have usually fished it in fairly shallow lakes.

Once again it is fairly simple and the best way of describing it is from the red tip. First I slid on a ledger stop and then a small cigar shaped float, the type with a hole through the centre. Next I fix up a hook link of about 12 inches, a swivel one end and the hook the other; this is also slid on the line under the float. This is followed by a bead and another swivel tied to the end of the line. Now I have to determine at what depth I want my lip hooked livebait to swim at and having made that decision I tie a piece of line to the other end of the swivel. At the bottom end of this is my weight.

The bait can now swim from the bottom swivel to the float. This last rig is my most complicated and I do not use it very often, though it does work and I have caught perch to 31b plus on it. I do use other rigs now and again, but these three are my standard ones with which I catch 90% of my perch. They may not suit your style of fishing, but if you haven’t done much perch fishing, it’s worth giving them a trial as they do catch fish.