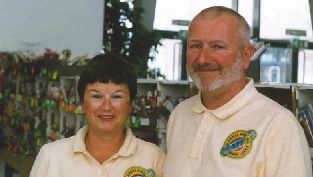 Text and Photos by Pete Welsh

If any of you have read my Lure Angling Odyssey, you’ll already be familiar with my ‘novice’ status and clumsy attempts to catch fish. If you haven’t, well you are now. So what better way of jumping in at the deep end than going to the LAS annual conference and mingling with the big boys and girls.

I’ve been to quite a few work-related conferences and the like, but nothing had prepared me for the gathering of ‘characters’ who make up the cream of this, still, minority branch of the sport. Given this, it was no surprise that Paul and I got lost on the way and ended up, ever so appropriately asking for the LAS conference in the reception of Derby psychiatric hospital! ‘The Lure Angling conference?’ I screwed up my eyes and spotted somebody in a white coat carrying a straight jacket and syringe running towards me. A swift exit and few more wrong turns and we were parked in Derby University’s quite attractive grounds. A bloke in a fly fishing waist coat walked past an ornamental pond, he stopped, stooped and stalked the fat koi from behind the irises. This was definitely the place!

After being lightened of twelve quid I was faced with…Aladdin’s cave! I had never seen so many colourful bits of sausage-shaped plastic this side of Amsterdam! My wallet trembled and buried itself deeper into the inner pocket of my biker jacket. ‘God, Paul, look those plugs are only a quid a piece!’ and so on went the conversation as every trade stand seemed to be giving stuff away. How glad I was that I had resisted the temptation to spend some money over the previous two months of my lure angling career! This was it, even I could spend money happy in the knowledge that I was getting a bargain. But, just as my wallet feared for her life we were called into the lecture theatre, it was time for Sue and Chris Harris!

Sue and Chris Harris trying not to laugh

If you haven’t heard of Sue and Chris (hey, we’re on first name terms!) then you haven’t been lure angling. They run the excellent Harris Angling mail order company, the catalogue alone is worth the effort (Tel. 01692 581208). The Harris’ began proceedings by making us all fair sick to the back teeth with beautiful tales of fishing in exotic locations for abundant, fierce-fighting fish. Nile perch in Lake Nasser with Mad Mohammed El Harris (that’s what they said!); bass, speckled trout and tarpon fishing in Florida, a top holiday where you can combine Mickey Mouse with a Meadow Mouse! Sue’s tropical exploits left us all envious and eager to win the lottery, especially her tales from Cuba where the barracuda have teeth like dogs and can slice you fingers clean off. Sue’s advice: ‘If in doubt, kill them.’ I wonder if they have any kids?

Chris followed with a discussion about tackle for the tropics, although I assumed this would be a shallow marketing ploy, it was simply sound advice from an angler who’s been there, done that and bought the absolute minimum for a good week’s sport. Top marks for realistic advice and not saying ‘you’ll need three new rods and reels and a hundred lures all a reasonable prices…’ Excellent, dedicated, lure anglers, lucky buggers.

After the Harris’ holiday snaps I had lost all resistance and had to spend some cash. Chris and Sue were given a few of my hard-earned pounds, but the bargain stalls of the show had to be the LAS member’s second-hand stall and Quality Fishing Plugs.

The LAS stall was full of dirt cheap stuff. I bought two nice plugs for 30 pence and an Abu Atom for 50 pence. Who in their right mind wakes up and thinks, ‘I no longer need a perch coloured Atom spoon.’ Not me, but thanks whoever you are, I caught a chub and a pike on it within twenty minutes of my first session of the new season! Mervyn Jones was a friendly LAS representative, so I took his piccy.

The Lure Angling ’99 award for top absolute bloody bargain and wheeler dealers goes to…Matt Carter and Dave Smith of Quality Fishing Plugs. So much so that I spent thirty quid with them alone! Creek Chub Pikies for £1.50, a Rapala Super Shad for £7 that I eventually got for a fiver and many more completely silly stuff from Rebel, Heddon, Bomber, Arbogast all for around a third of the retail price. Top geezers, loads of chat and advice and excellent sales people to boot. The sold me a load of plugs, so I’ll give them one (a plug that is!)…you can call Matt on 01202 480520 in Ringwood.

Tell him who sent you! He looks like this (left), with Dave (Right).

One daft oversight was that in our eagerness to spend money, well I am new to this, we missed Ralston McPherson’s talk about piking in Ireland and Scotland, oops! He concentrated on jerkbaits and fish location and can be contacted at the PAC website.

After a fry up it was time to hear Andy Lush’s (of The Friendly Fisherman Tel. 01892 528677) US jerkbait and Muskie exploits. I was new to this type of fishing, but Andy hit the mark, appealing to novices and experienced jerks alike. Can’t help smirking every time somebody says I should jerk my bait. Again, loads of free advice and no sales pitch. I really should have bought the Shimano rod and multiplier outfit for £90 though, does the offer still stand, Andy?

After Andy was, to my mind the highlight of the day, Martin James. A veritable media star and supporter of the British tackle industry (every credit), Martin held the public in the palm of his hand. I couldn’t believe it! In the nicest possible way, Martin is a total nutter. I love people who stick to their guns and don’t give a hoot about what everybody else thinks. Fly fishing for pike. Mmm, not very sane, on canals, mmm. Fly fishing for shark, some of which are bigger than the boat? Total nutter! Fantastic speaker. He had me convinced, I nearly bought a fly rod on the spot! Then I remembered that I don’t have Martin’s skill and experience. It seems that once you’ve caught pike on the fly, any other type of fishing pails into insignificance, I can imagine! Thanks Martin for a great talk, I look forward to meeting you again.

Martin James
proving there’s no flies on him!

Zimbabwe born Ian Jacks had the unenviable task of trying to follow the previous speaker. He wisely didn’t even try to compete. Having said that after a few seconds I was enthralled by his relaxed eulogy to freshwater bass fishing, notably professional black bass tournaments. His talk also included a free question and answer session about plastic worms and fishing in inaccessible places with the top sections of a carp pole. The sun beats down too hard in Zimbabwe methinks.

The whole thing was topped of in the time honoured tradition with a monster raffle. An amazing array of excellent tackle and lures had been donated by the exhibitors and I didn’t win anything, bugger. I didn’t mind really because I’d saved well over a hundred quid on the bargains I’d bought, which more than covered the entry fee and the cost of petrol. A fantastic day out which was just the ticket eleven days before the season opened. A good job done by all at LAS. I can’t wait for next year!

P.S. Just as everybody had packed up and Paul and I were on our way a friendly bearded chap said hello and we chatted for a bit. I mentioned I had written for Angler’s Net, ‘You have? I’m Steve Crowther.’ I think that’s somebody else I’ll be seeing again soon. The chub are sh****g themselves at the prospect Steve, and p*****g their pants about me. See you up a tree.

NOTE: The companies mentioned in this article have been included because they are genuinely nice people who offer serious advice and great products and not because they slipped me a tenner for the publicity. So tell them Pete Welsh or Angler’s Net sent you! Oh, and if you want to find out a bit more about the Lure Anglers’ Society, click here.