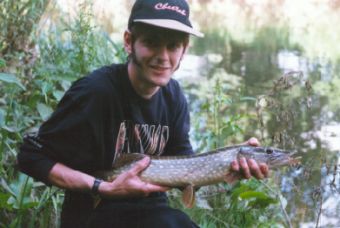 The Soar With A Bare Head

Smash! My radio alarm clock was once more hurled across the bedroom as it dared shout local news at my slumbering form. Local news for local people! Who cares? Nobody at 5:30 a.m. It was June the 16th.

For some odd reason all this lure fishing, and blanking, had rekindled my coarse fishing interests. Odd really, but no. I had once loved trotting for chub and roach, but had never lived near a reasonable river. Now I live under a mile from the River Soar. Leicestershire’s finest and tributary of the Trent, it would be a shame to waste it.

So, the morning of the 16th was spent general float and ledger fishing. It was fine. Paul and I caught a few nice-ish fish and got sunstroke. Very pleasant. Best of all, Paul’s prize two ounce perch was attacked by something as it was being played (well dragged in really). Mmm, interesting. After a lunch of bacon and eggs we were ready to get lightweight. Keepnets and other nonsense were left at home as Paul and I set off with spinning rods assembled and small rucksacks with lures, drink, chockies, scales, landing net and camera.

A whole new world seemed to open up as we walked along the canal. We didn’t have a permit to fish this stretch of the canal, but it did lead to the point where the Soar breaks off into an un-navigable five or so miles. No boats. No towpath. Poor access. Perfect! We passed a number of pole anglers who looked at us and our spinning rods in disgust.

‘Mmm, about two or three pounds of roach and perch. Oooo!’ he said as his tiny float sank slowly, ‘missed it.’ Bloody hell what fun!

We walked on and had the same story from others. About another two hundred yards later, there were no more anglers. The canal looked much nicer here, but nobody could be bothered to carry three assorted poles, a couple of float rods, ledger rods, banksticks, keepnets, fridges or kitchen sinks this far. The sun shone, the birds sang, fish jumped and Paul and I had the run of the place!

We ducked through a Victorian tunnel and emerged into the lush greenery and smell of wild garlic that surrounds every stretch of isolated, summer river. We could hear the gurgling water but couldn’t find the source of the sound. I was eager, but was doing something I’d unlearned-I was relaxing. A kingfisher dazzled past my eyes.

In no time we’d hacked our way to the water’s edge and lobbed out our Ondex spinners. Ah, the lure of choice! They’d served us well. Something wasn’t right. Plop! Zoom! The Ondex was swept down stream in the current. The easy action made it hard going in the free-flowing water, and it couldn’t hold the depth, it just splashed over the eddying current. This was not what I knew! A few casts later and I decided to change lure. The resistance was too great and the lure was too light for the flow. I looked in my lure box. Spoons! Of course. They were a pain in the gravel pit because they sank quickly into the weed. Plop! As the perch-coloured Abu Atom I’d bought for fifty pence landed perfectly under the opposite bank’s willows. Snatch! Bloody hell! First cast had paid off, not only a bite, a fish! Not only a fish, a chub! In time honoured fashion Paul came charging through the vegetation like Sylvester Stallone in Rambo, but thinner. Even though the chub was only twelve ounces, it was the first fish from the river and the first lure caught chub either of us had seen. Steve Crowther eat your heart out!

The spoons was perfectly suited to the current. I had to start learning a whole new style of fishing. The river was a completely different animal from the gravel pit. But this animal felt alive and mysterious. It was if you never knew what could be lurking by the weed bed or in the hole under the willows. Pike, that’s what. In the central channel of a reed lined stretch the Atom was almost pushed out of the water as a fit, two pound jack devoured it. This was a fierce fish. It was all muscle and used the current to force errors, but in a short battle I was soon holding my biggest ever pike or lure caught fish. Not a bad start, or so I thought.

We’d soon switched on to the fact that the fanning technique of the still water was unnatural on a river. I began to remember all my stick float fishing. River fish swim up and down, not side to side. Casting in an arc that covered the width of the river but well downstream was becoming very comfortable and sensible, and when this included twitching a spoon upstream close to features on the near bank bites came thick and fast. Paul’s first fish was the most beautiful, lean, muscular pike we’d ever seen.

Paul aiming a 5lb pike at an unseen enemy

At just five pounds it fought for twice its size in the current leaving Paul needing a Mars bar and a sit down. Shortly after losing a fish and then the Atom (no I could not retrieve it this time, sniff) I hooked the biggest fish of my life in a deep hole hard against the near bank. It forged upstream and as it passed my feet the line became slack and the fight was over. I’d used a silver Toby.

In a fit of madness I clipped a perch-coloured sinking, jointed Creek Chub Pikie to my trace and plopped it in the hole. Wallop! My 2lb test curve rod was whipped over as the reel’s drag screamed out line. The river was at least four feet deep below my feet and the line sliced through the current like wire through a block of Stilton. I could feel the pike’s head shaking frantically as I tried to bring the fish to heel. A thick green-gold flash taunted me as the angry beast twisted and snaked. The line went slack. All was quiet. Paul stood above me with net in hand. I don’t know who had been more pissed off Paul, me or the fish. It was going dark. We were happy. If this was lure fishing on the river, then roll on sunrise.

Sunrise did indeed roll on. And by 7 a.m. we’d arrived at a different length of river. Narrower and faster flowing than before. Silver Toby was clipped to trace and two casts later I netted a fine two pound chub. Bloody brilliant!

The next swim produced yet another personal best pike, okay, so it wasn’t difficult to beat two pounds, but nobody would turn their nose up at a hard-fighting, fast river pike of four pounds on light tackle, would they?

It was still before 8 a.m. on June 17th. The best, although we’d never have dreamed it, was still to come. We moved swins again. This time we were fishing on small ledges on a sandbank. The river was narrow, deep and very fast here. Paul ha
d decided to try a large, cheap, copper coloured spinner. I stuck with the Toby. Downstream from my peg I saw paul strike, and seconds later something left the water like a Polaris missile.

‘What the F&*£!’ Language Paul, please, this is family column.

Again the demented fish tried to eat the sun. Paul’s rod was being whipped round under the combined weight of the fish and the current. I leapt down beside him to assist netting. I saw the fish, nice chub I thought. I netted the fish. Trout! In the net lay an stunningly marked wild brownie of about two pounds. The gold flanks and vivid red and black speckles had me transfixed. Paul was hyperventilating again. We just looked at eachother and laughed. We’d been screaming like Dale Winton and needed to calm down. Silly grins were the order of the day. A trout in the Soar!

Mentioning the trout to a match angler we met a few days later, we were informed that Paul had in fact caught a chub, there are no trout in the River Soar, and certainly none that big. How fortunate. We are quite poor at fish identification. I hope nobody complains about us eating chub.

If that fishy tale wasn’t eough, more was to come. We walked along the bank giggling and talking about trout when we came across a pleasant bloke doing a spot of trotting in a narrow fast flowing swim.

‘Hiya, caught much’ I greeeted.

‘Yeah not bad, I’ve got a few nice chub and a big barbel,’ he beamed, ‘they seem to have gone off now though, I’m sure a pike’s moved into the swim.’

In a fit of over confidence I said, ‘Do you mind if I chuck a lure in, might be able to get the pike out for you.’

He just smiled, shrugged his shoulders and said ‘why not?’

I took his place by his seat box and keep net and gently lobbed the spoon about fifteen yards downstream by a willow. Plop! Sink, twitch. ARGHHHHHHHHHH! After a good 5-10 minutes of large pike, fast current and thick reed beds, I was screaming at Paul to be careful netting the fish. The flow was so strong merely trying to hold the pike still in front of the net was hard work!

The fish was safely landed and carefully unhooked. It was weighed, just over 7lbs, photographed and released. We thanked the angler and walked on. One cast, one pike. He carried on fishing, we carried on giggling and somewhere in the river Soar the pike was sulking. It was a little over 32 hours into the season and I’d caught my biggest ever fish of any sort on any method. It was a pike on a lure in a river we’d been told was rubbish for spinning in. The 1999 season was looking good. And the word was spreading about two thrash metalers lure fishing on the river Soar. Nobody believed the stick float angler as the tale of the ‘expert’ pike catcher shot round the pubs of Loughborough faster than my gran on pension day.

Me, well pleased I’d taken up lure fishing. I’ll have to practice holding them!