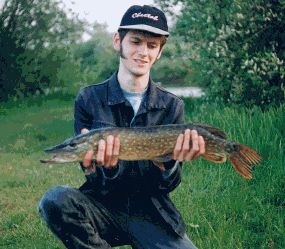 Out On A Limb

As April turned into May something extraordinary happened. As I was sitting in my office dreaming of the two pike I had outwitted the previous week, I began to feel discomfort in my eyes. I couldn’t work it out. I could barely make out what I had written on the computer monitor. There was some sort of glare. I’d seen it before. It was sunshine! Pick up the ‘phone I urged.

‘Well, you know…’ I mumbled about rising barometric pressure and warmth. Cold blooded fish metabolism, etc. I seemed to make perfect sense. Well to myself at least.

As sure as plugs are happiest in hawthorns, we were bunking off work early to go and chuck a few lures into a weedy relic of Britain’s road building history. We’d learned much over the previous month. The breakthrough had been made and confidence in the method had inspired us to concentrate on the fish rather than the tackle. It was a very warm evening. And as the setting sun glinted on the surface of the gravel pit Paul let out a yell.

‘Yes! Pete, help me net this.’ I dropped my rod and ran over to Paul grabbing the large landing net en route. As I stood atop the bank I could see Paul’s seven foot, light spinning rod straining, almost doubled over. The reel clutch screamed in protest as the predator tried to rid itself of a size four silver Ondex.

Mad fish, instead of fighting its way out into open water, the pike had driven itself head first into a thick blanket of silk weed right in front of Paul’s feet. How was I to net it? I couldn’t even see it and Paul’s rod could not move the mass of clinging weed. Paul gave some slack. It worked, but only just. The pike had moved about a foot out of the weed, but had gathered about 5lbs of weed with him. I scooped the net in the water and dragged the lot out. The rod went slack and Paul began to hyperventilate. A few ounces under six pounds was the biggest fish by far between us.

I quizzed Paul about technique. As with the two pounder he’d caught earlier that evening, Paul had been working his spinner hard against the bank close to weed beds or over-hanging trees. A pattern was emerging.

As the sun began to set and the mozzies decided I was Belgian chocolate, I stuck into something and then thought I’d lost it. But no, the first perch had been caught! What beautiful fish they are too! Even greedy little four-ouncers.

Next cast and the same story. It was going dark and I was late. We were catching fish now! And I’d managed not to lose a lure. This was definitely better.

The following Saturday we were chomping at the bit to get fishing. A near six pounder was a nice fish. There had to be more. Ondex spinners were the order of the day and the weather was hot again. It felt good. Even Medusa seemed to crack into a smile as she waved us into no man’s land. Maybe it was a mirage.

We took care to fish the features and soon I’d caught a perch. Nice, this was on the same silver Veltic spinner I’d caught the others on. Paul and I speculated about sonic patterns. The Veltic worked well, but gave off a fast vibrating feel whereas the Ondex gave off a slow but stronger, thudding signal. Could this explain why we’d only caught perch on the one and pike on the other? It’s reassuring to think that fishing is scientific. It’s also reassuring to believe in Father Christmas.

Plop! The bronze Ondex landed so close to the tree I gasped. If only every cast could be that accurate. Snatch! A pike had grabbed it almost a soon as the spinner had hit the water. I played the fish and was happy to land my biggest pike to date (still only just over a pound). Paul had never caught one so small, but I was happy. It was my second fish of the session.

We moved on to new territory. I was feeling confident as the hot spring sunshine beat down on my shaggy head. There was hardly any water to fish in, about a foot and a half above the thick bed of Canadian pondweed, this was getting to be frustrating. The Ondex was perfect. Easy to cast, slow sinking and able to give off both gold-coloured flashes and sonic signals at a slow retrieve. Bang! A small jack grabbed the spinner with breathtaking ferocity just as I was about to lift it from the water. Within quick succession I had caught and landed two more and lost another, all on the same Ondex spinner.

Okay, so size might matter. Anybody got a snap tackle?

Spinner struck underwater tree and cheapy braid snapped. B*%&$cks! I tried every other spinner I owned, but caught no more fish. Sometimes only the right lure for the job will do the trick. Odd really to think that fish that are daft enough to fall for a bit of metal or plastic yet can actually be discerning connoisseurs of them as well. Did somebody say scientific?

The following session the weed had begun to take over the pit. In addition, I been frustrated by the braid’s tendency to fray after a few casts, so had switched back to 10lbs b.s. mono. These two facts made for a miserable, blanked session. First, the weed made it too difficult to add any life to lures, even shallow divers and surface poppers. Second, I hadn’t realised how dependent I had become on the low stretch braid for bait presentation. Okay, so it got tangled easily and frayed, not to mention cost an arm and a leg, but it was perfect for adding those tempting little twitches to a plug or spoon, excellent for pulling lures out of weed, detecting bites and setting hooks. We both blanked. And the next time, and the time after that. The day after Lure Angling ’99, Paul and I were both up for it. We’d been inspired by the country’s lure angling royalty, we had lots of new lures to try and we had both loaded our fixed spool reels with tightly wound Tiger Braid.

Avarice takes over again as dusk sets and sunken log creaks. I got the plug back
though!

We blanked. We threw lures into trees and, true to form I nearly drowned myself retrieving plugs from sunken logs. It was one week until the season opened and not too soon either! The pit had outlived it usefulness. The River Soar beckoned as its predator population did not s**t itself in the knowledge that the Spin Doctors were coming!