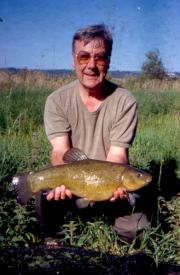 Although primarily a carp angler, I take time-out most summers to fish for tench. If all that tench experience is aggregated, it amounts to a lot of fishing – and, modesty aside, has produced a great many tench. As you would expect, I have come to conclusions regarding which tench baits are most effective, so without any more preamble I shall embark on my top eight list. ‘Top Ten’ would have had a better journalistic ring to it, but I cannot find ten which qualify!

GILT TAIL WORMS
Gilt-tails are similar in appearance and size to redworms, with the difference that the last centimetre or so of the tail is a bright yellow. I am not talking ‘yellowish’ – you sometimes see that on ordinary redworms – but really vivid yellow. They are, in my opinion, the very best tench bait of them all.
Now for the bad news.

You cannot buy them, nor can you breed them. The only way of obtaining gilt-tails is to cultivate the acquaintance of a pig farmer, and ask to dig in his muck heap. Don’t dig too far from the edge of the heap or you will get brandlings, which despite their frequent recommendations in angling literature are a very poor bait. Dig near the periphery, where the temperature is somewhat lower, and you will unearth loads of redworms – and among the redworms, just occasionally, you will come across a gilt-tail.

REDWORMS
Redworms are an excellent bait – second only to gilt-tails. They are more readily obtainable, too, making it unnecessary to forage in pigs’ muck! Many tackle shops sell them; they can also be obtained mail order. I breed my own. In my garden I have a large compost bin in which I put vegetable waste such as potato peelings, carrot tops, onion skins etc. Just occasionally I put grass cuttings in – not too often, though, or the compost overheats and brandlings take over. Now and again I tear up a corrugated cardboard box and put that in. When my sons were young and we kept rabbits and guinea pigs, soiled straw from hutch clear-outs went in. And that is all there is to it – apart from an occasional watering in dry conditions.

Redworms will colonise the compost naturally – alternatively a starter stock can be put in. On no account, incidentally, should compost accelerators be used – just leave it to nature.

From my disparaging references to brandlings, it is obvious that I do not rate them at all. They can be identified by means of very obvious mustard-yellow bands encircling the body. Redworms have these, too, but they are more discreet. Occasionally you find worms which have wider bands than are found on redworms, but narrower than those on brandlings. Such worms look like hybrids – and I suspect they might be because hybridisation is not unknown among annelids. Hybrids or not, I call them ‘redlings’. I’ve caught tench on them, but prefer not to use them if I have proper redworms available.

Gilt-tails and redworms are best hooked head-end only.

LOBWORMS
The downside of gilt-tails and redworms is that they are somewhat fragile so are unsuitable for long casting. Under these circumstances I like the head section of a lobworm. Old angling books always specify the ‘tail of a lob’, but I find the head better. I pass the hook through the non severed end of the head, and out of the side.

My son, Peter, is a big fan of dendrobaenas, which are larger than gilt-tails and redworms, but considerably smaller than lobworms. They are readily obtainable from tackle shops or by mail order, and are tremendously hardy so will last for weeks if kept somewhere cool.

COCKLES AND CLAMS
These, for many years, were my secret bait! I have caught loads of big tench on cockles. Two or three on a hair is about right. You need fresh or frozen cockles, incidentally – not those which are sold in vinegar.

Clams – or to be more precise, deep water clams – are often sold as cockles. They are a separate species, but other than being slightly smaller, are virtually identical. I presume they live beyond the low tide mark – hence the name – and are being harvested due to many traditional cockle beds being fished out.

The problem with cockles and clams is that they go off very quickly, so need to be carried frozen in a wide-necked food flask.

PRAWNS
Peeled prawns are very fragile so should be cocooned in PVA tape in order to withstand casting.

One on a hair is sufficient, with the tail of the prawn adjacent to the hook.

They are an expensive bait, but tench love them.

BOILIES
Received wisdom has it that tench have a ‘sweet tooth’ (if we are going to be pedantic, we should say a ‘sweet pharyngeal’), so the usual boilies recommended for tench are those flavoured with strawberry, peach etc. This argument is flawed on two counts. One; ‘sweet’ synthetic flavours are not sweet – most, in fact, taste very bitter. And two; although tench like sweet baits, they like savoury versions, too.

One of my all-time favourite tench boilies contained a natural seafood extract – I used to buy it from Colne Valley Baits (I don’t think they trade any more). Nashbaits ‘Success Pack’, which contains natural savoury palatants is good, too. So is liver extract.

Given the non availability of Seafood Extract, my first choice boilie for tench fishing would be a carp style fishmeal recipe flavoured with the ‘Success Pack’. Nashbaits S-Mix is another good one – I’ve caught lots of tench on the Scopex version.

Tench will take most boilies readily – just so long as they do not contain garlic. Tench will eat garlic flavoured boilies, but not with any real enthusiasm.

I have caught tench on 20mm boilies, but by preference use 10mm-15mm versions.

METHOD MIX BOILIES
When fishing Method style, I like to use hookbaits made from my Method mix. My hookbaits are then compatible with the groundbait. No flavours are added, just a little intense sweetener and maybe a ‘glug’ or two of liquid molasses. The mixture is mixed to a paste with beaten eggs, formed into 10mm cubes, and boiled for about one and a half minutes.

PELLETS
Trout, salmon and marine pellets make excellent tench baits – we are back on the fishmeal-cum-savoury theme, you will notice. If they are drilled with a fine diameter nut drill, they can be fished on the hair just like boilies. Very small pellets split if drilled, so they need be at least 10mm. Alternatively I use old-style Van den Eynde hookbait pellets on the hair, in conjunction with standard pellets as free feed. I said ‘old style’ because Van den Eynde discontinued their original hookbait pellets, and the replacement version is unsuitable for use on a hair.

ALSO RANS…
In addition to the foregoing, I have caught tench on particles (notably sweetcorn and black eyed beans), luncheon meat, maggots and bread. All are good, but none are as effective as my ‘top eight’.